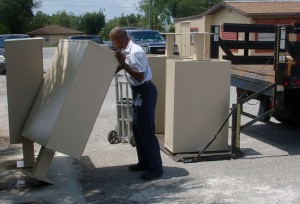 The USPS has beat a hasty retreat in Lake Placid Florida, where the postmaster decided to unilaterally switch local businesses to cluster box delivery. To add insult to injury, the cluster boxes were apparently installed on private property without first getting the owner’s permission. (It gets worse- the property owner in question was arrested at the request of the postmaster in 2009 for trespass. At the time he was raising funds for the local Lions Club, something he said he had been doing for years without any problem).

The outcry from business owners, managers and staff was immediate. The most common complaints were a lack of notice the change was coming and a decision to install the cluster boxes without the consent of the property owners.

Rice said the site determination was made by Lake Placid Postmistress Tanya Schmidt. The installations were then authorized by Schmidt and a Growth Management Coordinator from a regional office.

Schmidt “was unaware that permits were required and expedited the installation of the boxes in the interest of safety,” Rice said. The safety aspect was not explained.

Ironically, the site chosen for the East Interlake Boulevard cluster boxes is on property owned by Miles Lambert, the same man who was ordered arrested by a Lake Placid postmaster in December 2009 after he refused to stop offering candy for donations as a Lions Club project to provide eyeglasses to children.