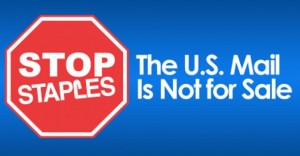 July 9, 2014 – “A Postal Service letter to the APWU dated July 7 indicating that it is terminating the no-bid deal with Staples and replacing it with an ‘approved shipper’ program is a ruse,” said APWU President Mark Dimondstein. “The USPS is changing the name of the program, without addressing the fundamental concerns of postal workers and postal customers. If it looks like a duck, walks like a duck and quacks like a duck, it’s a duck.

“The USPS letter to the APWU makes it clear: The Postmaster General intends to continue to privatize postal retail operations, replace living-wage Postal Service jobs with low-wage Staples jobs, and compromise the safety and security of the mail,” he said.

“The people of this country have a right to postal services provided by highly-trained, uniformed USPS employees who are sworn to safeguard the mail,” the union president added.

“This attempt at trickery shows that the ‘Don’t Buy Staples’ movement is having an effect,” Dimondstein said. “We intend to keep up the pressure until Staples gets out of the mail business.