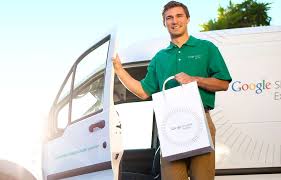 Google is preparing to invest in expanding Google Shopping Express, its local shopping and delivery service. Re/code reports that the search giant will spend up to a half billion dollars to expand the service nationwide. It currently operates in the New York, San Francisco and Los Angeles areas.

The service would help Google leverage its overall search prowess to muscle in on Amazon’s territory- with a difference:

Unlike Amazon, Google does not operate its own giant warehouses or store inventory for more than a few hours. Instead, it fulfills customer orders by picking up items from nearby retail stores. So rather than compete directly against retailers like Amazon does, Google is attempting to position itself as an ally.

While the service would compete with the USPS to some extent, it could also provide an opportunity in more sparsely populated regions, where it wouldn’t be economically viable for the search giant to physically deliver goods itself. Even in the urban areas where it currently operates, Re/code says that some orders are “handed off” to other delivery providers for next day delivery.