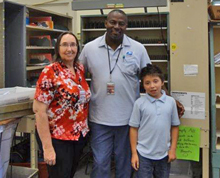 When Mexia, TX, Letter Carrier Christopher Tucker saw a car hit a boy who was riding a bicycle in a busy street, he ran over to check on him.

Since the boy could walk, Tucker led him out of the street and ran over to a nearby fire station to get help. An emergency medical technician determined the boy had some bruises and scrapes but no broken bones.

When Tucker finished his route that day, he returned to the office and told Postmaster Jackye Penney and Customer Service Supervisor Debra Hernandez about the incident.