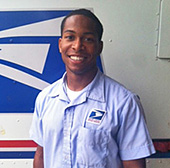 Akron, OH, Letter Carrier Lorne Talley was on his route when he noticed children crowding around a woman, who was on the ground near a middle school.

Talley ran over and determined the woman was experiencing respiratory distress. After calling 911, he began to administer cardiopulmonary resuscitation and stayed with the woman until emergency responders arrived.

If Talley had not given the woman CPR, she wouldn’t have survived, emergency responders said.

After the incident, Talley continued with his route.