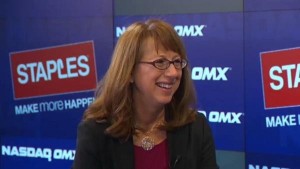 NH Labor News reports that Staples executive Shira Goodman mocked postal workers and their “jobs for life” at a “town hall” session for Staples employees. Goodman is a Mitt Romney protege who got the Staples job after working for Romney’s Bain Capital. Goodman may not have a “job for life”, but she and her colleagues seem to be pretty secure in their positions. While the Staples Annual Report doesn’t list Goodman’s salary, it says that her boss, CEO Ronald Sargent, has received compensation valued at about $26 million over just the last three years. During that time period, while the stock market boomed, with the S&P 500 up by 50%, Staples’ stock price has lost almost half its value.

Who needs a job for life when you’ve got a deal like that?

Shira Goodman, North American Commercial President for Staples couldn’t hide her contempt for Postal Workers when she spoke to hundreds of Staples employees in her first ever Town Hall style meeting. Ms Goodman chastised Postal Workers with several disparaging remarks including: “It must be nice to have a job for life” then adding ”those days are over, this country can’t afford to do business as usual”. In her world Staples workers are nothing more than temporary workers always at risk to have their jobs abolished.

It comes as no surprise that Shira Goodman was on the “Jobs and Economy” Steering Committee during Mitt Romney’s transition to Massachusetts Governor in 1992. Judging by her attitude towards workers there is no doubt she buys into Romney’s hateful 47% comment made during his presidential run.

It’s also hardly shocking that Shira Goodman’s job before joining Staples in 1992 was being a manager for Bain and Company (1986-1992). Staples was one of her clients. Bain was the leader in outsourcing workers jobs for management profit. She must feel quite comfortable in outsourcing postal jobs to her transient workforce.