Shares of Staples (SPLS) are getting reamed this morning after the struggling office supply retailer announced first quarter earnings fell short of analyst estimates and cautioned for the current period. For the quarter ending May 3 Staples said it earned $0.18 on $5.65 billion in revenue. Wall Street had been looking for $0.21 on $5.61 billion in revenue. Same store sales declined 4%.

Staples says it expects to earn somewhere between $0.09 – $0.14 in the current quarter compared to a $0.15 average estimate. 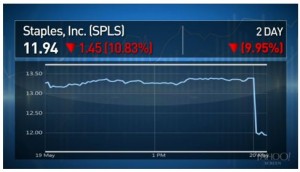 Guiding lower is becoming a quarterly event for Staples. In March the company announced plans to close 225 of its U.S. stores.

Earlier this month Staples competitor Office Depot (ODP) said it will close 400 of its locations by the end of 2016. Between the two chains that suggests somewhere between 12 and 13 million feet of retail mall and strip mall property hitting the market in the next two years. With Barnes & Noble (BKS) still taking up more than 17 million feet of space, and some Circuit City and Borders locations still sitting empty, the transition taking place in American suburbs is still picking up steam.