Australia Post has revealed that its digital mailbox service left beta testing and has been formally released.

The digital mail service, intended to be a more secure version of email for bills and other important documents, went into public beta last year.

In addition to the formal launch of the digital mailbox, Australia Post said it would also scale up its physical mail services, including year-round delivery on Saturdays. The announcement comes at a time when debate in the United States occurs around whether to kill Saturday deliveries to save money for the US Postal Service.

Australia Post chairman John Stanhope said a user-pays postal system was a viable option after the company’s letter operations ­suffered a $218 million loss last year because the public had sent fewer letters than ever.

The user-pays model means residents would pay an annual bill in addition to the stamp price, which increased from 60¢ to 70¢ in March.

“If you want it fast, you pay for it,” Mr Stanhope said.

A postman in Victoria has been caught on CCTV throwing mail into the bushes.

Australia Post is featuring national and state floral emblems in a new stamp issue available now. These floral emblems are striking examples of Australia’s flora and form part of the nation’s identity and floral heritage. 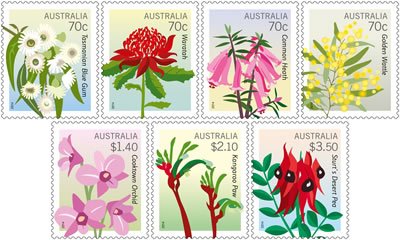 “Australians have a love of flowers and these floral emblems are not only visually stunning, but are symbolic of our nation,” said Australia Post Philatelic Manager, Mr Michael Zsolt.

The Golden Wattle was officially proclaimed as the national floral emblem by the Minister for Home Affairs, Robert Ray on 1 September 1988 at a ceremony held at the Australian National Botanic Gardens.

The designer of the stamps is Jo Muré of the Australia Post Design Studio.

The criticism came after Australia Post conducted an online survey asking their customers if they would be willing to pay a $30 annual fee for daily mail deliveries if the free service switched to three-days-a-week.

Australia Post is currently looking for ways to improve the efficiency of its traditional mail business. Although the company overall made a healthy profit last year thanks to soaring parcel volumes, the letters business lost $220m.