You probably weren’t wondering about this, but just in case- the rabidly homophobic “American Family Association”, which has called for a boycott of the Harvey Milk stamp, and says it will refuse to accept mail bearing the stamp, is serious about it! From the humor blog Wonkette:

You may recall that we recently challenged you to send the nice folks at the American Patriarchy Association some love in envelopes adorned with Harvey Milk stamps, which they are urging people to boycott because ew, gay. And so Alert Wonkette Operative “TK” sent them a little note, and even a small donation, in an envelope with one of the terrible horrible demon stamps. And back it came! 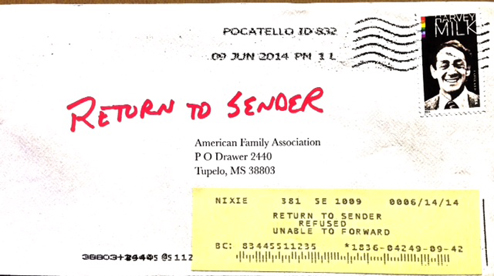 The National Review, that bastion of traditional entitled conservatism, founded by the quintessential erudite elitist William F. Buckley, has weighed in on the Stop Staples campaign. The Review thinks that postal workers should be attacking their union rather than USPS management or Staples.

That in itself tells you a lot about the right wing mindset. They have a problem with democracy, and can’t quite grasp the idea that postal workers belong to unions by choice, and they elect the union leadership (or as the right wingers like to call them, “union bosses”). So telling workers to attack their unions is the same as telling them to attack themselves.

Here’s how the Review explains why postal workers should apparently be lobbying to slash their own pay:

Consumers benefit from having more options, and the Postal Service may also save, if a recent internal memo is any indication. The memo estimated that private-sector retailers could offer the same mail services for less than a third the cost, which gives a bracingly clear picture of how inflated mail workers’ pay has become. The memo also added that “the [Staples] pilot will be used to determine if lower costs can be realized with retail partner labor instead of the labor traditionally associated with retail windows at Post Offices.”

So as far as the heirs of Bill Buckley are concerned, postal workers wages are incredibly “inflated”? Really? A level five clerk at top step makes around $52,000 a year. That works out to $25 an hour. I’d love to see the writers at the National Review try to survive on that. END_OF_DOCUMENT_TOKEN_TO_BE_REPLACED

In January the US Postal Service announced on the Federal Business Opportunities web site that it was planning to buy “assorted small arms ammunition”. People who know anything about the USPS wouldn’t have been particularly surprised about the announcement, given that the USPS has a sizable armed police force, the Postal Inspection Service. But right wing commentators quickly went, well, postal about the news: “USPS ANNOUNCES GIANT AMMO PURCHASE” crowed WND.com. The fact that no quantities were specified in the solicitation wasn’t mentioned.

The claims were so outlandish that even one anti-gun control site felt the need to debunk it. In February, gunssavelives.net carried a post pointing out that the USPS “contains within its organization the oldest federal law enforcement agency in the country – The United States Postal Inspection Service.” The post continues:

So the Postal Service has most likely been purchasing “assorted small arms ammunition” for over 200 years. The department has over 1,000 armed agents. Fourteen USPIS agents have been killed in the line of duty.

Move along, nothing to see here.

But conspiracy theories continued to make the rounds. This past week, Newsmax.com, the most popular right wing extremist news site carried the news. (Newsmax may be popular, but it’s apparently a bit slow on the uptake). While the story made passing reference to the Inspection Service, it also pushed a new theory- that the USPS was trying to drive up the price of ammunition.

Finally this week the USPS issued a statement denying the bizarre story:

The USPS statement probably won’t carry much weight with the committed gun nuts out there, but on the bright side, the conspiracy theory seems to be confined to the usual lunatic fringe outlets like Newsmax and Fox News.

If there is a conspiracy behind all the hysteria, the real culprit is probably the gun lobby itself. The big gun companies that underwrite the NRA and the rest of the so-called “second amendment advocate” groups are the only ones who would profit from all this. Like the fella said, “follow the money”! Smith and Wesson are no doubt laughing all the way to the bank!

The House Republican budget considered in committee Wednesday would require U.S. Postal Service employees to pay more for health care, using that reform and others to save $19 billion over 10 years.

Rep. Paul Ryan, R-Wis., targeted USPS employees in his budget blueprint as part of a larger effort to find cuts through the federal workforce. Ryan’s plan would also impose pension contribution hikes on all federal employees and reduce the size of the workforce through attrition measures.

INDIANAPOLIS, Feb. 3, 2014 /PRNewswire-USNewswire/ — Moms Demand Action for Gun Sense in America vehemently objects to any attempt to amend existing federal law and lift the ban on guns in post offices, as proposed by Sen. Rand Paul of Kentucky. Sen. Paul’s amendment to the Senate postal reform bill would allow licensed gun owners to carry weapons inside post offices. Guns are currently banned in all American federal buildings, including post offices.