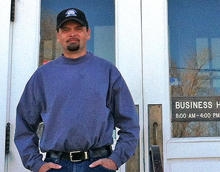 Saint Anthony, ID, Rural Carrier Vance Blanchard had just finished his route when he noticed people had gathered on the bank of a frozen river. He soon realized a 6-year-old girl had walked out on the frozen river and had fallen through the ice.

Despite the hazards of the rapidly running river and a wind chill of minus 6 degrees, Blanchard sprang into action. He found a tow rope in his car, which he used to rescue a man who had tried to walk out on the ice and had fallen through near the bank. Blanchard gave the man his coat and then threw the tow rope to the little girl.

Firefighters arrived and pushed a ladder onto the fragile ice which they used to pull the girl from the water. Blanchard and others then pulled the ladder, with the girl and firefighter, back to shore.

Blanchard later said he thought the firefighter on the ladder was the hero. But Postmaster Corey Knapp disagreed. “I think they both were,” said Knapp. “Vance was very good at keeping the little girl calm, and he helped her get the rope on, which kept her from going into the current. He made some quick and good decisions, which saved her life for sure. She wouldn’t have lasted long in that cold water.”