Canada’s politicians and media have bought into a long-term project driven by right-wing notions of society and the economy that seeks to re-frame public services as “businesses” that should be run “efficiently” along the lines allegedly followed by the private sector.

While the mythology of the private sector’s supposed efficiency is nothing more than that, mythology, that is a matter for a different article.

CPC spokespeople are always talking about the deficit in the Canada Post Pension Plan. But they never mention that the plan also has a huge surplus. And while the surplus is growing, the deficit is decreasing.

Here are some of the facts you will find in the 2015 Canada Post Pension Plan Report to Members:

Solvency only triggered by Plan Termination

The solvency deficit only comes into play if a pension plan is terminated. Since the federal government has ruled out privatization from the mandate of the Review Committee, there is no reason to believe the plan will be terminated. Solvency deficits are caused by low long term interest rates. Should (or when) interest rates go up by only 1%, the solvency issue will disappear entirely (see page 20).

This is why CUPW and all of the other postal unions do not believe there is any reason to change the pension plan especially given that it is running a $2.7 Billion surplus.

CPC Recognizes a Pension Plan is important – for some.

In their pamphlet attempting to sell their global offer, CPC said the following to regular Urban and RSMCs who are covered by the defined benefit pension plan: “We understand the importance of your pension. We get that it brings you peace of mind.” Yet, their proposal calls for all temporary employees and OCREs to be excluded from the pension and only receive a low value defined contribution plan. So much for caring about the peace of mind of thousands of their employees.

We demand that all employees be eligible for the defined benefit pension plan.

We all deserve “Peace of Mind”

To see the 2015 Canada Post Pension Plan Report to Members go to:

Global News reports that Canada Post has declined to agree to the two week extension of contract talks requested by the Canadian Union of Postal Workers. The network quotes a spokesperson as saying that the company had tabled “fair” offers on Saturday, and had yet to receive a formal reply:

Given that, and the fact that any further delay will only add to the uncertainty for our customers and our employees, we cannot agree to further delays.

The earliest date a legal work stoppage could begin is Saturday, July 2.

UPS (NYSE:UPS) If you are a business owner, an enterprise, an online shopper or planning for a special occasion, you will want to have a backup plan for your shipping needs starting  July 2, 2016. Reports of a potential labour dispute at Canada Post could impact shipping.

A news report indicates Canada Post is warning its largest customers to prepare for a work-stoppage-related service disruption. The time to plan ahead is now. UPS Canada is prepared to take on additional packages through its UPS Access Point ® Network. With almost 900 locations across Canada, businesses and consumers alike have a convenient and simple solution to pickup and drop off pre-labeled UPS shipments at a rate that offers in province, next day delivery, comparable to the published Xpresspost rate in many areas.

“UPS Access Point locations are situated in convenient places with evening and weekend hours to fit the busy Canadian lifestyle,” said Christoph Atz, president, UPS Canada. “We are ready for additional volume, and the UPS Access Point Network is robust and prepared to serve Canadians.”

Consumers and businesses across the country use the UPS Access Point Network. For example, Canadian company GoodFood, relies on a smooth delivery to maintain its customer service standards. “The UPS Access Point Network has benefitted our customers who need flexible solutions to pickup their packages when they are not at home,” said Jonathan Ferrari, CEO, GoodFood. “We are a grocery delivery service, so we need to ensure our packages are delivered on time and the ingredients stay fresh.”

The UPS Access Point Network provides an easy solution during this critical time when routines may be disrupted and consumers are uncertain about the status of potential orders.  A new simplified shipping tool is available at ups.com/readynow. The tool helps process shipments and locate a nearby UPS Access Point location to drop off packages.  UPS notifies the consumer when the package is at the location and is ready to pickup. The alert also has the location’s address and hours.

By the end of the 2016, UPS expects to have more 27,000 UPS Access Point locations around the world.

OTTAWA – Postal workers are asking Canada Post management for a two-week extension on the cooling-off period that would otherwise entail a termination of their contract on July 2nd.

At that point, the union says Canada Post might either lock its workers out or try to force a walkout through punitive changes to their working conditions.

“We are asking management to give us a chance, to give the public review a chance, to keep sitting down with us at the bargaining table, and give the workers a chance to get a fair deal,” said Mike Palecek, national president of the Canadian Union of Postal Workers.

The profitable Crown Corporation has been talking tough with its workers, despite being in its 20th profitable year out of the past 22. Postal workers are fighting exorbitant demands for cutbacks and concessions that they say just aren’t reasonable in light of the company’s success.

“Mr. Chopra and his executive team are getting their bonuses every year,” said Palecek, referring to the Harper-appointed President and CEO who has refused to resign since the Liberals took office. “We don’t understand why he needs to squeeze so much out of the people who are making the profits for him.”

“We’re concerned that a labour dispute will taint the outcome of the very important review that the Liberals are conducting,” said Palecek. “We’ll do everything we can to avert that.” 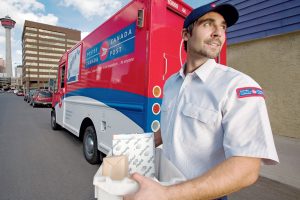 If a full strike or work stoppage occurs, USPS will continue to offer customers the option of using Global Express Guaranteed (GXG) service for delivery of documents and merchandise in Canada, with transportation and delivery by FedEx.

GXG service is available online and at thousands of participating retail locations throughout the United States.

Additional information and updates about mail service to Canada are available on the Postal Service’s International Service Alerts page.

OTTAWA, June 27, 2016 /CNW/ – Labour negotiations between Canada Post and the Canadian Union of Postal Workers (CUPW) continue.  Talks have been ongoing since late 2015, and the parties are now in the final stretch. No legal work disruption can occur until July 2, 2016. Details of the offers are highlighted in the background section below.

While there is still time to reach new agreements, a legal work disruption could occur as early as July 2, 2016. We understand the impact a work disruption would have on customers and are therefore doing everything possible to reach a negotiated settlement quickly. While a labour disruption remains a possibility, we are asking customers to take precautions. END_OF_DOCUMENT_TOKEN_TO_BE_REPLACED

Canada Post is notifying customers of a possible labour disruption that could stop your mail from moving.

The union representing postal workers and Canada Post have been unable to reach an agreement on a new contract.

If a deal can’t be hammered out in the next two weeks, a work stoppage is possible.

OTTAWA, June 10, 2016 /CNW/ – Postal workers are welcoming the return of proactive pay equity legislation recommended by the Special Committee on Pay Equity report It’s Time to Act. However, they say Canada Post should be acting right now at the bargaining table to address the glaring discrepancy between its urban and rural mail carriers.

“We are currently struggling to negotiate equal pay for the work of equal value done by our female-dominated rural and suburban mail carrier members. These workers meet the Committee’s definition of a female-dominated group. 70% of rural mail carriers are women and they are getting a worse deal than the majority male urban letter carriers, even though their skills, efforts, responsibilities and working conditions are similar,” said Mike Palecek, national president of the Canadian Union of Postal Workers.

Canada Post is mentioned disapprovingly in the Committee’s report as an employer that has used the current complaints-based process to fight pay equity all the way to the Supreme Court. Although the Crown Corporation eventually lost, those affected by wage discrimination had to wait 30 years for their pay equity settlement.

However, the union is determined to keep pay equity for its rural and suburban carriers on the bargaining table while the government ponders the Committee’s recommendations. It says the recommendation to table legislation within 18 months is too long to wait and that the government should act immediately to address wage discrimination. The union has already written to Justin Trudeau twice on the issue and has yet to receive a response.

“Several witnesses in that report say that ‘justice delayed is justice denied.’ That’s why we have to fight for justice for these workers now,” said Palecek.

In the past, CUPW has broken ground for progressive gender-based policies, including the right for federal employees to paid maternity leave, for which postal workers walked picket lines in 1981. It has also negotiated employer-funded childcare programs for its members, including members with children with special needs.

For the report of the Special Committee on Pay Equity, visit

The federal government has ordered Canada Post to stop delivering Your Ward News, a crude Toronto newspaper that has denied the Holocaust, praised Adolf Hitler and derided Jews, Muslims, women and the LGBT community. 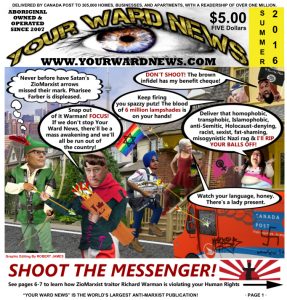 Public Services and Procurement Minister Judy Foote, who oversees Canada Post, made the decision less than two months after a human rights complaint accused the government and the postal service of “regularly and knowingly delivering misogynist, racist, anti-Jewish, anti-Muslim, and homophobic hate propaganda.

”Since last year, Canada Post has been delivering the free paper to a purported 305,000 homes and businesses in Toronto, despite objections from residents and postal workers.