From the Association of Magazine Media:

The magazine industry supports and needs a healthy Postal Service. Yet, the Postal Regulatory Commission is proposing rate increases for the Market Dominant segment of the mail stream as high as 40 percent.  Such a move will have the chilling effect of driving away business and creating an existential threat to the Postal Service. END_OF_DOCUMENT_TOKEN_TO_BE_REPLACED

The Postal Regulatory Commission’s Annual Compliance Determination (ACD), issued this past spring, shows that the USPS is providing an annual subsidy of over $500 million to newspaper and magazine publishers. That’s how much the agency loses every year because periodical revenue doesn’t cover the cost of delivery. Since the 2006 PAEA act, publishers have received almost $5 billion in subsidies.

The federal subsidy for periodicals is almost as old as the post office itself, and was intended to encourage the efficient dissemination of news, information and opinion in the young republic. 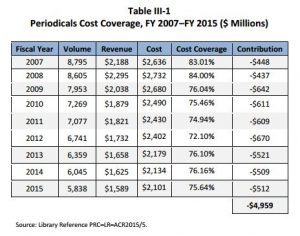 The advent of the internet has removed most of the rationale for the subsidy. And the lack of taxpayer subsidies for the USPS means that losses in one class of mail have to be made up by other mailers.

Push may soon come to shove as both the publishing industry and the postal service adjust to continuing declines in revenue. Whether new postal reform proposals will address the problem is doubtful- the most recent proposal floated by Congressman Jason Chaffetz would require all classes of mail to cover their expenses- but it still includes language requiring the PRC to consider “The educational, cultural, scientific, and informational value” of mail classes in establishing rates.

Which is exactly what the law says now.