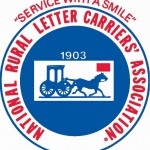 Please read and follow the instructions below and in the attached Stand-Up Talk that you should be receiving today. Your safety is important as we continue to deliver on our essential mission for the American people. END_OF_DOCUMENT_TOKEN_TO_BE_REPLACED

The National Rural Letter Carriers has announced that the NRLCA and the USPS have agreed to allow regular rural carriers to volunteer for Sunday work during the Christmas period: END_OF_DOCUMENT_TOKEN_TO_BE_REPLACED

The National Rural Letter Carriers’ Association and the United States Postal Service have negotiated a Tentative Agreement to cover the 3-year period from May 21, 2018 to May 20, 2021. END_OF_DOCUMENT_TOKEN_TO_BE_REPLACED

The contract covers approximately 119,000 employees represented by the union.

Highlights of the agreement include annual general wage increases, a reduction in the employer share of health premiums, and the preservation of workforce structure modifications achieved during a collective bargaining process in 2010.

The new agreement, announced in February, runs through May 20, 2018.

The Postal Service and the union representing rural letter carriers have reached a tentative contract agreement. The full text of the agreement can be downloaded here (.pdf file).

Here are some of the highlights:

The tentative contract provides the general wage increases for each year of the Agreement:

The increases above do not reflect additional COLA adjustments for regular, PTF, and RCA/RCR employees on the rolls prior to August 11, 2012.

Cost-of-Living Adjustments (COLA) and method of determination will remain the same. The “Base Index” date for the purpose of calculating future COLA adjustments was updated from July 2011 to July 2014. July 2014 represents the date of the last COLA adjustment under the 2010-2015 Agreement.

For RCA/RCR employees on rolls prior to August 11, 2012, an amount equal to the COLA paid to full-time rural carriers on an hourly basis under the 2015 Agreement will be rolled into
RCA/RCR hourly rates during the first full pay period of August 2018.

In light of the expansion of Sunday/holiday parcel delivery service, the parties have agreed to establish a new, non-career leave replacement employee classification: assistant rural carrier (ARC). ARCs may only perform Saturday, Sunday, and holiday duties and will be paid on an hourly basis at the same rate as RCAs hired on or after August 11, 2012.

ARCs will be bargaining unit employees with limited contractual benefits. Articles 15 and 16 will apply, but ARCs will not have access to noncareer employee health benefits, earned leave, or bidding rights.

ARCs are not required to take a hiring exam, but all other hiring requirements will apply. Their probationary period will be the earlier of 90 days worked or one year. They must apply for any desired RCA positions and may not automatically convert to an RCA vacancy. ARCs may be required to provide a vehicle for delivery and will receive EMA accordingly.

ARCs will be entitled to Sunday and Holiday parcel delivery prior to RCAs. They may also case and carry routes on Saturday only after all available RCAs have been assigned and prior to working a regular rural carrier on the relief day. The ARC will not be designated as the primary leave replacement on any regular routes and will not be included in any criteria for implementation or calculation of the formula.

There is no mail count scheduled for 2017.

In 2018, the parties will conduct an opt-out mail count beginning on February 24, unless an alternate method for evaluating routes is implemented or the parties (at the national level) agree not to conduct the count.

If the mail count occurs, all routes will be counted except when the regular carrier or RCA (Des. 79) agrees with management not to count the route.

This represents the first time that RCAs (Designation 79) serving auxiliary routes have been given the opportunity to opt-in (or opt-out) of having their assigned route counted.

Effective with the quarterly adjustment based on the November 2016 CPI-W, the equipment maintenance allowance base rate shall increase by one-half cent (0.5¢) to fortyseven and one-half cents (47.5¢) per mile or major fraction of a mile scheduled per day or $19.00, whichever is greater.

Effective with the quarterly adjustment based on the November 2017 CPI-W, the equipment maintenance allowance base rate shall increase by one-half cent (0.5¢) to fortyeight cents (48.0¢) per mile or major fraction of a mile scheduled per day or $19.20, whichever is greater.

The agreement requires the Postal Service to ensure that seniority is properly applied to rural carriers. Following the effective date of this agreement, the Postal Service, for the first time, will be required to post a current seniority list in every office and furnish a copy to the Union.

The Postal Service will then be required to update seniority lists as changes occur, post the updated list in every office, and provide copies to the Union.

May 6, 2014 – The presidents of the four postal employee unions – the APWU, the National Association of Letter Carriers, the National Rural Letter Carriers Association and the NPMHU – have written to members of the House of Representatives, urging them to vote against a postal bill drafted by House Oversight and Government Reform Committee Chairman Darrell Issa (R-CA). The bill is scheduled for consideration by the committee on Wednesday, May 7.

“We write on behalf of nearly 500,000 postal employees who live and work in every Congressional District in America to urge you to oppose the so-called ‘Administration’s Postal Reform Act of 2014,’” the presidents wrote. “If you serve on the Oversight and Government Reform (OGR) Committee, we ask that you vote against the legislation on Wednesday. If you do not serve on the committee, we urge you to express your opposition to the bill.”

“The legislation drastically reduces service,” said APWU President Mark Dimondstein. “It ends Saturday mail delivery and promotes contracting out of retail services — including in outside retail establishments. It fails to protect service standards, and fails to address in any meaningful way the cause of the Postal Service’s manufactured financial crisis,” he said.

“Our organizations are committed to working with leaders in both parties to strengthen the Postal Service,” the letter says. “Unfortunately, the bill before the OGR Committee on Wednesday would severely weaken it. We urge your strong opposition.”

The four unions representing rank and file postal workers have sent the following letter to Darrel Issa, Chairman of the House Oversight Committee, and Elijah Cummings, the Ranking Member:

We write to share our views on the hearing held on April 8, 2014 on the President’s proposals in the FY 2015 budget regarding the U.S. Postal Service. We write on behalf of nearly 500,000 postal employees who live and work in every Congressional District in America and who belong to our unions. We respectfully request that this letter be included in the record of the hearing. END_OF_DOCUMENT_TOKEN_TO_BE_REPLACED

Washington, D.C., April 8, 2014 – The Greeting Card Association GCA and the National Rural Letter Carriers’ Association NRLCA issued the following joint statement in advance of the House Committee On Oversight & Government Reform hearing, calling for meaningful reforms to strengthen the Postal Service, and condemning proposals that would cut essential services, such as six-day delivery:

“The GCA and NRLCA strongly oppose Congress’s constant attempts to eliminate essential services such as six-day delivery” said Rafe Morrissey, GCA Vice President of Postal Affairs. “This action would only serve to place a competitive disadvantage on the Postal Service and do nothing to fix the organization’s financial problems. Additionally, the estimated savings assumed by proponents of these cuts are inflated and unrealistic, as they fail to factor in the costs of continued weekend parcel delivery. The Postal Service is in need of true reform, not shortsighted cuts that would fail to solve current budgetary problems and diminish the agency’s ability to provide universal services relied upon by millions of Americans.

“The NRLCA and its members are proud to stand alongside the Greeting Card Association in support of six day mail delivery,” said Jeanette Dwyer, President of the National Rural Letter Carriers’ Association. “Americans nationwide have come to rely on the ability to send and receive mail on Saturdays, and the success of Sunday parcel delivery shows that there is increasing demand for delivery services. As the Postal Service looks to grow and thrive in the 21st century, scaling back delivery services is a misguided step backward that sends the wrong message to the Postal Service’s customers and partners.”

March 11, 2014–Declaring that “the U.S. Postal Service is under unprecedented attack,” the four postal unions have formed an alliance to fight back to preserve America’s postal service for the benefit of the public.

“A congressionally manufactured financial crisis drains the USPS of vital resources,” the union presidents wrote in a proclamation (PDF). “Six-day delivery is under constant threat of elimination. The reduction of service standards and the elimination of half of the nation’s mail processing centers have slowed service and wiped out tens of thousands of good jobs. Post offices in cities and small towns are being sold or closed or having their hours cut back.

“Corporate privatizers seek to gain control over larger segments of postal operations–and to get their hands on the Postal Service’s $65 billion of annual revenue. The postmaster general’s policies of subcontracting and degrading service are fueling the privatization drive,” the proclamation declared.

“We stand with the people of our country in defense of their right to a universal postal service operated in the public interest.”

The goal of the alliance is to enlist public support in preserving the national treasure that is the U.S. Postal Service. The USPS is based in the Constitution, provides Americans with the world’s most affordable delivery network, and is operationally profitable without using a dime of taxpayer money.