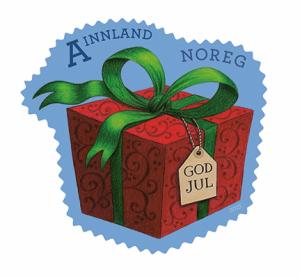 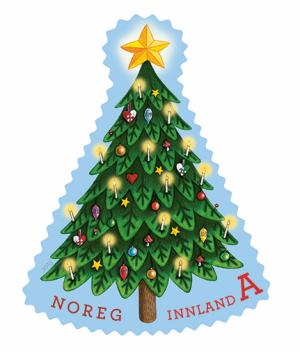 One of the best things about the holiday season is getting to see some of the festive stamps from around the world.

Here are this year’s holiday stamps from the country closest to the North Pole, Greenland:

“To me, Christmas means that you are together and having fun with those closest to you. In these busy times, Christmas is a breathing space in which we can remind ourselves that we should be thankful for the good things we have and the love we enjoy from our loved ones. Christmas is the time when the cold of winter is cancelled out by heart-felt warmth and caring for each other. These things I have tried to illustrate on the two Christmas stamps.” 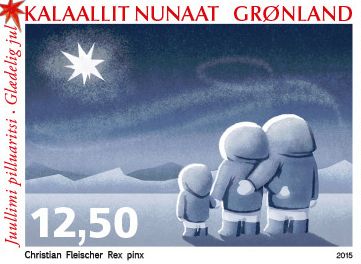 Christian Fleischer Rex was born in Næstved and raised in Nuuk. He was trained as an animator at the Animation Workshop in Viborg in 2000. Since then he has worked on various cartoons in Denmark and Europe – including Asterix and the Vikings. Together with Lars Frederik Andersen, Christian owns and operates the production company Deluxus Studio that delivers advertising and promotional materials in the form of movies, photos, illustrations and animation for businesses and institutions.

This year’s Christmas Island Christmas stamp issue has taken a humorous approach to linking the festive theme to the island’s name.

Located in the Indian Ocean some 2,600 kilometres northwest of Perth, Christmas Island is the sole peak of an underwater mountain range rising above the ocean’s surface. The island came under Australian control in 1958, but Australia Post has produced its stamps only since 1993. Over recent years, the Christmas Island Christmas issue has taken a humorous approach to linking to the island’s name. 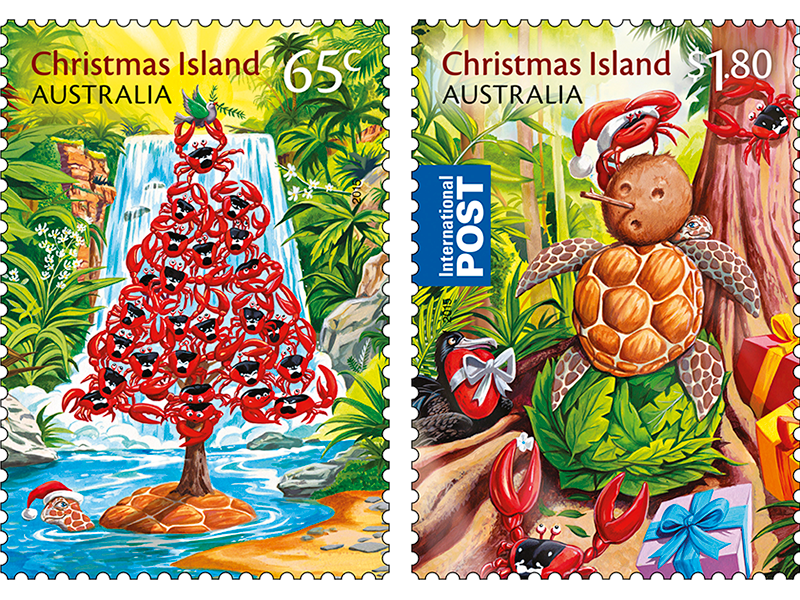 WASHINGTON — The Postal Service has more than a billion Holiday themed stamps in stock from previous years, and has printed 800 million more to help Americans celebrate this year’s holiday season.

“This is an exciting time of year when Americans share greetings with family, friends and loved ones,” said Postal Service Stamp Services Acting Director Mary-Anne Penner. “Our vast assortment of holiday-themed stamps are sure to fit everyone’s needs. And by ordering them online, you can save a trip to the Post Office.” END_OF_DOCUMENT_TOKEN_TO_BE_REPLACED

NEW YORK — Post Offices across America are experiencing a blizzard of new Forever stamps today with the introduction of the Geometric Snowflakes Forever stamps. 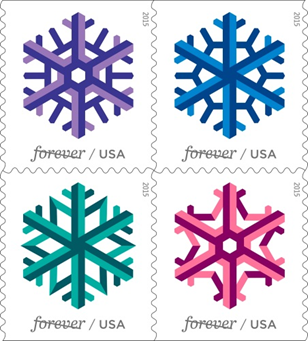 “With these four commemorative Forever stamps we’re presenting today, we hope to capture the art and the science of the snowflake and preserve it forever,” said U.S. Postal Service Northeast Area Operations Vice President Richard Uluski in dedicating the stamps. “These bright, cheerful stamps bring a whimsical splash to holiday cards, thank-you notes, invitations, greeting cards and any mailing that calls for a touch of warmth during the coldest months of the year.”

The law of physics makes each snowflake unique and each of the four stamps depicts a different snowflake. When it snows, millions of ice crystals form unique patterns that are as stunning in their complexity as they are fleeting. Stamp designers were inspired by the different shapes. Each snowflake is drawn in one of four colors: purple, pink, green or blue. Applying light and dark shades of color enhanced the intricate geometry of each flake and added a feeling of playfulness to the stamp art.

Forever stamps are always be equal to the current First-Class Mail one-ounce price. The stamps were designed by Antonio Alcalá and Leslie Badani of Alexandria, VA.
END_OF_DOCUMENT_TOKEN_TO_BE_REPLACED

The official dedication ceremony will take place at the Charles M. Schulz Museum in Santa Rosa, CA, at 9 a.m. PT. The event is free and open to the public and the stamps will be available nationwide that day. Customers may pre-order the stamps now through this link only for delivery shortly after Oct. 1. END_OF_DOCUMENT_TOKEN_TO_BE_REPLACED