Help for Hurricane Harvey Victims — (September 1, 2017) The TSP has made a temporary change to the financial hardship withdrawal rules for participants affected by Hurricane Harvey: As of September 1, 2017, we will treat any Financial Hardship In-Service Withdrawal Request as a qualifying hardship and will waive the rule prohibiting employee contributions for 6 months after taking a hardship withdrawal provided one of the following is true: END_OF_DOCUMENT_TOKEN_TO_BE_REPLACED

WINTER PARK, Fla. – Richard Hornsby expected to find a toy for his son purchased and shipped for free thanks to his Amazon Prime subscription at his home last weekend.

The company said it had been delivered, but when they returned to their Winter Park home, it was gone. END_OF_DOCUMENT_TOKEN_TO_BE_REPLACED

Is the US Postal Service giving Amazon preferred treatment at the expense of other mailers? Investment advisor Josh Sandbuite of Greenhaven Associates thinks so, according to a column he wrote for today’s Wall Street Journal: END_OF_DOCUMENT_TOKEN_TO_BE_REPLACED

Pilots contracted to deliver Amazon packages began picketing Tuesday because of a longstanding labor dispute, a sign of further potential disruptions through the end of the year at one of Amazon’s two airline partners. END_OF_DOCUMENT_TOKEN_TO_BE_REPLACED

CRANBERRY TOWNSHIP, Pa. – A Cranberry man was shocked when he was told his Amazon Prime package had been delivered to his home, but that his postal carrier had removed it and taken it to the post office, leaving him a bill.

“I checked the mailbox and found an envelope from the U.S. Post Office saying I owe $3.78,” said Scott Puhac. END_OF_DOCUMENT_TOKEN_TO_BE_REPLACED

DES MOINES, Iowa — Many of you order items on Prime Day from Amazon last Wednesday and the Des Moines’ Post Office was ready to get those new items to you on-time.

”It gets pretty busy, but you know, they usually get them done pretty quick,” said Anthony Perdue, a carrier for the USPS in Des Moines.

Cheryl Love is the Postmaster for the USPS Des Moines district and she says that the last couple days have been the busiest outside of the holiday season. END_OF_DOCUMENT_TOKEN_TO_BE_REPLACED

The Wall Street Journal reports that American consumers are now making a majority of their purchases online rather than in stores.

For the first time, consumers say they bought more of their purchases on the web than in stores, according to an annual survey of more than 5,000 online shoppers by United Parcel Service Inc.

The shoppers now made 51% of their purchases on the web compared with 48% in 2015 and 47% in 2014, according to the survey by UPS and analytics firm comScore Inc. The survey polled shoppers who make at least two online purchases in a three-month period, excluding groceries. 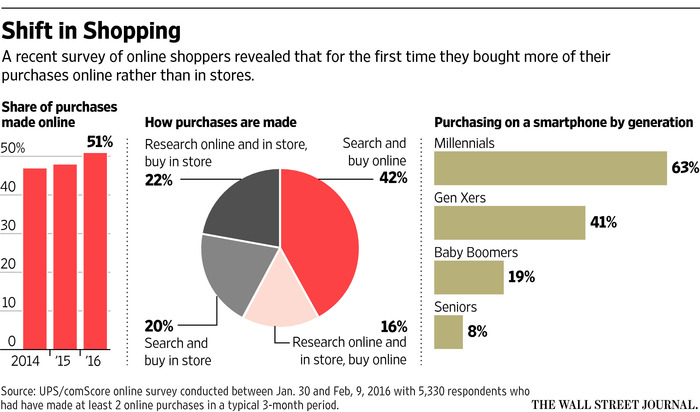 This year, 44% of smartphone users said they made a purchase from their device, up from 41% a year ago. It also helps explain why retailers are having so much trouble adjusting to the new cybershopping era.

The shoppers reported that only 20% of their purchases were made in a store the conventional way.

And who’s driving the increase in online commerce? Amazon of course- the WSJ reports that another survey shows that Amazon is responsible for 60% of the increase.

PITTSBURGH (KDKA) — If Amazon.com had its way, every shopper would shop online, and then have that order filled and packaged at fulfillment centers like one in Crafton PA with products to be delivered to your doorstep by Amazon deliverers, instead of the traditional U.S. Postal Service, UPS, or FedEx delivery.

“They really are doing what I would call academically vertical integration.  They want to control all steps in the process, and they’re doing that more and more,” Prof. Elaine Luther, a Point Park University business professor, told KDKA money editor Jon Delano on Monday.

Source: Amazon Contracts For Its Own Fast Delivery From Distribution Center « CBS Pittsburgh

A battle is taking shape over home-delivery of groceries that could have an impact on “last-mile” logistics. Wal-Mart Stores Inc. will work with Uber Technologies Inc. and Lyft Inc. to test a grocery-delivery service to compete more directly with Amazon.com Inc., the WSJ’s Sarah Nussauer reports. 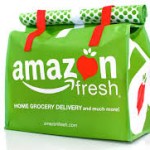 Last-mile delivery is proving a hot battleground, with startups like Instacart Inc. and DoorDash Inc. vying for a piece of the market and big players like the U.S. Postal Service, Uber and Amazon looking for ways to operate the business profitably.