SAN ANTONIO and AUSTIN, Texas, April 10, 2017 /PRNewswire/ — Harland Clarke Holdings Corp. (“HCH”), a provider of best-in-class integrated payment solutions and marketing services, today announced it has reached a definitive agreement to acquire RetailMeNot, Inc. (NASDAQ:SALE), a leading savings destination connecting consumers with retailers, restaurants and brands, both online and in-store. Under the agreement, Harland Clarke Holdings, a wholly owned subsidiary of MacAndrews & Forbes Incorporated and owner of Valassis, a leader in intelligent media delivery, providing unparalleled consumer targeting insights on a large scale, will acquire all of the outstanding shares of RetailMeNot Series 1 common stock for $11.60 per share in cash. END_OF_DOCUMENT_TOKEN_TO_BE_REPLACED

In his recent New York Times article, Whitson Gordon fails to consider some important points about the continuing value of mail. Marketing Mail is read more and has a higher response rate than other forms of advertising because it provides highly personalized messaging into customer’s hands, making it more engaging to consumers. END_OF_DOCUMENT_TOKEN_TO_BE_REPLACED

On August 20, 1958, Lester and Irving Wunderman, Ed Ricotta, and Harry Kline hunkered down at the Hotel Winslow in New York and turned the U.S. Mail into one of the world’s most powerful marketing channels. The very first direct mail agency, Wunderman, Ricotta & Kline, helped launch the Columbia Record Club, the first customer rewards program (for American Express), and, ultimately, the ZIP Code. Lester Wunderman’s notion that direct marketing could rival advertising as a way to establish brands and super-charge sales also had a profound effect on the fortunes of the Post Office Department.

The Postal Museum, housed in Washington, DC’s old main Post Office near Capitol Hill, is now laying the groundwork for telling the complex and significant story of the mailing industry. A website is under construction, and the museum hopes to have a full-blown exhibit in place within the next two or three years.

Read more: (requires free registration) The Story of the Mailing Industry Is Begging to Be Told – Direct Marketing News.

Angela Mior is a generous woman. She offers grappa and espresso to her guests. She takes care of stray cats. At 88 and living on a small pension, she typically gives hundreds of dollars a year to charity.

But even she has limits. And right now, Canada’s charitable sector is testing those limits.

In the last two months alone, 51 different non-profits have sent Angela letters soliciting donations. Some days, they spill out of her mailbox. People for the Ethical Treatment of Animals (PETA) has contributed 11 envelopes to the haul. Several other charities have chipped in five or more. 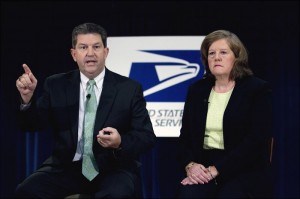 It may not be something that Postmaster General Patrick Donahoe and his COO Megan Brennan are likely to take credit for in public, but the U.S. Postal Service has become very good at closing and consolidating postal facilities. So good, in fact, that when Donahoe announced in June that the Postal Service would begin implementation of Phase 2 of its Network Rationalization Plan, mailers reacted with a yawn. The Phase 1 shutdown of 141 mail processing facilities completed in 2013 barely caused a ripple in their on-time delivery rates, and they’re expecting more of the same this time around.

Phase 2 will commence in January 2015 and be completed by the fall mailing season, according to a letter Donahoe sent to large customers.

WASHINGTON, March 17, 2014 /PRNewswire-USNewswire/ — In a keynote speech at the National Postal Forum–the annual mailing industry trade show–Patrick R. Donahoe, Postmaster General and Chief Executive Officer of the Postal Service, today described a changing attitude of marketers toward the role of direct mail as a means of attracting and retaining customers.

“We’re seeing mail being used in some tremendous new ways–especially as part of integrated marketing campaigns,” said the Postmaster General. “All of this is leading to a reappraisal of the role of mail in the marketing mix–and we’re starting to see the beginnings of that reappraisal.”

Providing perspective on the changing media landscape and the use of new technologies to improve the effectiveness of mail for both senders and receivers, the Postmaster General and other senior postal leaders discussed trends in the use of mail and efforts by the Postal Service to spur growth in the mailing industry.

END_OF_DOCUMENT_TOKEN_TO_BE_REPLACED

“Given the recent exigent postal rate increase, marketers are more pressured than ever to find solutions to offset their total cost of production and distribution without having to cut into important sales and revenue-generation activities such as prospecting,” said Steve Jaeger, President of Direct Marketing for Quad/Graphics. “Direct mail remains one of the most effective channels for engaging consumers and driving response and our expanded commingling platform helps marketers optimize delivery of this powerful print channel to achieve their business goals.”

The commingling process merges individual letter-size mail pieces from multiple clients into a single mailstream that qualifies for U.S. Postal Service presort discounts and dropship savings. The process appends mail pieces with an Intelligent Mail (IMb) barcode to qualify for the most advantageous postage rates while also giving marketers the ability to track their campaigns at the per-piece level. Quad/Graphics’ massive commingling volumes drive the greatest possible postal savings while speeding in-home delivery predictably and efficiently.

“Commingling makes sense for our clients,” Jaeger added. “Mailers who wouldn’t qualify for reduced postage because of the size of their mail file can realize sizable savings when part of our multi-million-piece pool.”

Quad/Graphics opened its East Coast commingling center in April 2013. To date, the center has been located within the company’s state-of-the-art direct mail production facility in Westampton, N.J. The new center – a five-minute drive from the existing direct mail production facility – will start up in April 2014 and is expected to be fully operational in the third quarter.

In a filing with the Postal Regulatory Commission on Feb. 20, the APWU strenuously opposed a USPS proposal to reduce service standards for Standard Mail. The USPS has asked the Commission for an advisory opinion on the proposal, which the USPS claims would alleviate a problem with heavy workloads on Monday by permitting delivery on Tuesday of Standard Mail that now is due to be delivered on Monday.

In its Brief to the PRC, APWU points out that this is another in a series of USPS cuts in service that cannot be justified by cost savings. The changes will cut service and force mailers to incur more costs, a pattern that has repeated itself as USPS has closed mail processing facilities. The APWU also pointed out that USPS has made no effort to justify the proposed service cuts by proving that USPS will save money.

The Postal Service has argued that the so-called “load levelling” effect of the proposed changes would make it possible for letter carriers to finish their routes earlier than they now do on Mondays. The AWPU has been critical of the USPS for causing letter carriers to be out late, often making deliveries after dark, because of previous facility closures and service cuts by USPS. Large mailers and mailer organizations also have been critical of the proposed service reductions.

APWU President Mark Dimondstein said, “It is ironic that the Postal Service is trying to justify more service cuts by referring to the problem of late carrier deliveries — a problem USPS caused by previous service cuts. There is no justification for these proposed cuts. The Postal Service cannot cut its way to financial health. It must expand and enhance service, not cut it.”

DENVER, Dec. 9, 2013 /PRNewswire-iReach/ — Denver startup launches a web-to-print, direct mail platform that allows users to turn their beloved Instagram photos into invitations, announcements, and holiday cards, while eliminating envelopes, addressing, licking, and stamping.  Users simply log into Mailagra.ms using their Instagram account; select the design of their choice, cherry pick their favorite Instagrams, and then upload or enter their mailing addresses. In as little as 24 hours, Mailagra.ms can be in route to family, friends, clients and customers.  Offering competitive rates, no minimums, and quick turns,Mailagra.ms launches just in time for your season’s greetings. END_OF_DOCUMENT_TOKEN_TO_BE_REPLACED