BLUE HILL, ME — Blueberries are culinary wonders, used in compotes, cobblers, smoothies, salads and countless other dishes. In 2022, blueberries will also be available in the form of a new 4-cent definitive stamp from the Postal Service.

Definitive stamps display their monetary value and are primarily used by large mailers to provide additional postage as needed. The Blueberries definitive stamp will be sold in coils of 3,000 and 10,000 and in panes of 20. These stamps will be sold at Post Office locations beginning January 9th, with preorders being taken online at usps.com/shopstamps.

Blueberries are an excellent source of vitamins, minerals and antioxidants. They are also tasty, popular and healthy. Most of the world’s blueberries are grown in North America and several blueberry species are native to this continent. These deciduous perennial shrubs range in size from less than 1 foot to more than 13 feet tall and produce sweet, edible fruits in colors from light blue to black when ripe. 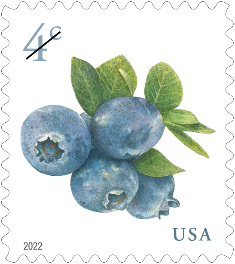 The popularity of blueberries has spread worldwide in recent years, especially to Europe and Australia. They are also being cultivated in South America, Africa and parts of Asia.

Though wild blueberries are now widely available and abundant, the fruit was not cultivated before the 20th century. Frank Coville, a U.S. Department of Agriculture scientist, discovered that the plants thrive in acidic soil, opening the gate to modern blueberry production.

Today, the highbush blueberry has become the most widely cultivated blueberry. Highbush blueberries are grown extensively in Maine, Michigan, Georgia, Florida, Oregon, Washington, New Jersey, California, North Carolina and other states. In addition to highbush, many acres of the native “lowbush” blueberry are also produced in Maine. The rabbiteye species, which tolerates higher temperatures, also grows well in the southern parts of the United States.

The stamp features a pen, ink and watercolor illustration of a cluster of blueberries and leaves. The 4-cent denomination is on the top left and “USA” is at the bottom right. Art director Derry Noyes designed this stamp using an existing illustration by John Burgoyne.

Customers may purchase stamps and other philatelic products through the Postal Store at usps.com/shopstamps, by calling 844-737-7826, or at Post Office locations nationwide.