Additionally, the Postal Service commemorates sun science and tap dance and issues a new 2021 postcard featuring an illustration of a mallard drake.

All stamp designs are preliminary and subject to change. Additional details, including issue dates, will be announced later. 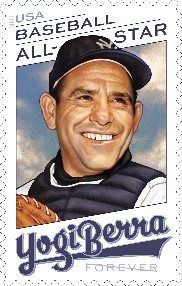 Honoring Yogi Berra (1925-2015), this stamp salutes one of the best and most celebrated baseball players of his era, winning a record 10 World Series with the New York Yankees. The stamp art is an original digital portrait of Berra dressed in his Yankees cap, pinstripes and catcher’s chest protector. Considered the best catcher in the American League in the 1950s, he was also a feared hitter, and in 1972 was inducted into the National Baseball Hall of Fame. Antonio Alcalá was the art director and stamp designer. Charles Chaisson was the artist. The “Yogi Berra” lettering was created by Michael Doret. 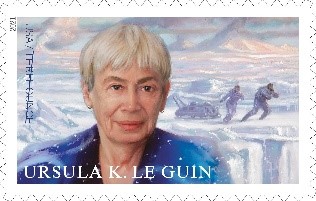 The 33rd stamp in the Literary Arts series honors Ursula K. Le Guin (1929-2018), who expanded the scope of literature through novels and short stories that increased critical and popular appreciation of science fiction and fantasy. The stamp features a portrait of Le Guin based on a 2006 photograph. The background shows a scene from her landmark 1969 novel “The Left Hand of Darkness,” in which an envoy from Earth named Genly Ai escapes from a prison camp across the wintry planet of Gethen with Estraven, a disgraced Gethenian politician. The artist for this stamp was Donato Giancola. The art director was Antonio Alcalá. The words “three ounce” on this stamp indicate its usage value. Like a Forever stamp, this stamp will always be valid for the value printed on it.

The art of Emilio Sanchez (1921-1999) is celebrated with four new stamps featuring his colorful architectural lithographs and paintings: “Los Toldos”(1973), “Ty’s Place”(1976), “En el Souk”(1972) and Untitled(Ventanita entreabierta)(1981). Sanchez explored the effects of light and shadow to emphasize the abstract geometry of his subjects. His artwork encompasses his Cuban heritage as well as his long life in New York City. Antonio Alcalá served as art director and designer for this pane of 20 stamps.

These 10 new stamps in a pane of 20 highlight stunning images of the sun that celebrate the science behind the ongoing exploration of our nearest star. The striking colors do not represent the actual colors of the sun as perceived by human eyesight. Instead, each image is colorized by NASA according to different wavelengths that reveal or highlight specific features of the sun’s activity. Art director Antonio Alcalá designed the stamps with digital images from NASA’s Solar Dynamics Observatory, a spacecraft launched in February 2010 to keep constant watch on the sun from geosynchronous orbit over the craft’s ground station in New Mexico. 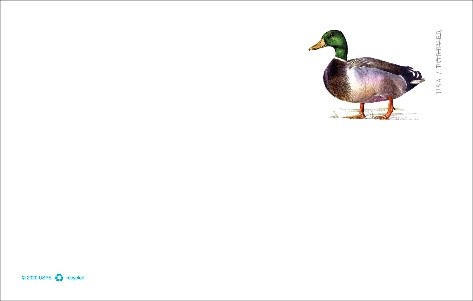 This new stamped card for 2021 features an illustration of a mallard drake (Anas platyrhynchos)from preexisting artwork by illustrator and designer Dugald Stermer (1936-2011). The full-body, left-facing profile was created in pencil and watercolor. Art director Ethel Kessler designed the stamped card.

Customers may purchase stamps and other philatelic products through the Postal Store at usps.com/shop, by calling 800-STAMP24 (800-782-6724), by mail through USA Philatelic, or at Post Office locations nationwide.