“A handwritten letter shows the recipient how much you care. The stamp you choose to adorn your envelope adds an extra important touch,” said U.S. Postal Service Stamp Services Director William Gicker. “The new 2021 stamps are designed to look beautiful on your envelopes, to be educational and to appeal to collectors and pen pals around the world. As always, the program offers a variety of subjects celebrating American culture and history, and this year, we made a special effort to include a little fun.”

This is a partial list of the 2021 stamp program. All stamp designs are preliminary and subject to change.

Lunar New Year • Year of the Ox
In 2021, the Postal Service will issue the second of 12 stamps in a new series of Lunar New Year stamps. Calling to mind the elaborately decorated masks used in the dragon or lion dances often performed during Lunar New Year parades, these three-dimensional masks are a contemporary take on the long tradition of paper-cut folk art crafts created during this auspicious time of year. Art director Antonio Alcalá designed the stamp with original art by Camille Chew.

Love
The Postal Service continues its popular Love series with a new stamp in 2021. The stamp art features a lighthearted and colorful digital illustration with the word “LOVE” and three large hearts shown in an unconventional palette of color duos, strikingly set against a dark blue background. Greg Breeding was art director; Bailey Sullivan created the original art and designed the stamp.

Chien-Shiung Wu
Chien-Shiung Wu (1912-1997) was one of the most influential nuclear physicists of the 20th century. During a career that spanned more than 40 years in a field dominated by men, she established herself as the authority on conducting precise and accurate research to test fundamental theories of physics. Art Director Ethel Kessler designed the stamp with original art by Kam Mak.

Garden Beauty
Garden Beauty celebrates America’s love of flowers and gardens with 10 new stamp designs in a booklet of 20. The stamps include a pink flowering dogwood; a rose-pink and white tulip; an allium, or ornamental onion; a pink and white Asiatic lily; a magenta dahlia; a yellow and pink American lotus; a pink moth orchid with mottled petals; a pink and white sacred lotus; an orange and yellow tulip; and a yellow moth orchid with a pink center. Art director Ethel Kessler designed the stamps with existing photographs by Allen Rokach. 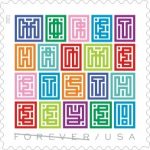 Mystery Message
The new Mystery Message stamp will put your sleuthing skills to the test. Featuring bright colors and interesting shapes, the stamp design is a visual riddle spelling out a message. Each colorful square contains a letter in an interesting pattern. The patterns, though seemingly random, were carefully placed so that when put all together, the message reads, “MORE THAN MEETS THE EYE!” Art director Antonio Alcalá designed the stamp. 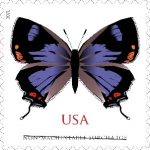 Barns
Four new postcard stamps celebrate the beauty and history of American barns. With differing qualities of light and color, each piece reflects one of the four seasons: a round barn surrounded by the hazy light and warm colors of fall, a gambrel-roofed barn in summer, a forebay barn in an early spring countryside, and a Western barn on a winter’s night. Ashley Walton designed the stamps with original artwork by Kim Johnson. Greg Breeding was the art director.

Day of the Dead
In recent decades, Day of the Dead has caught on in the United States as a festive and increasingly popular celebration for all ages. These new stamps will be the first issued by the U.S. Postal Service to mark this holiday. Luis Fitch designed and illustrated the stamps. Antonio Alcalá was the art director.

Brush Rabbit
The Postal Service features a brush rabbit (Sylvilagus bachmani) on this beautiful new additional-ounce stamp, available on a pane of 20 or in a coil of 100. The pencil-and-watercolor illustration is from preexisting artwork by designer and illustrator Dugald Stermer. The brush rabbit is a small brownish cottontail rabbit of the U.S. West Coast and Baja California, Mexico. Art director Ethel Kessler designed the stamp.

Raven Story
Merging traditional artwork with modern design touches, this stamp depicts one of many stories about Raven, a figure of great significance to the Indigenous peoples of the Northwest Coast. Among the cultures of the region, Raven plays an essential role in many traditional tales, including stories about the creation of the world. Inspired by the traditional story of Raven setting free the sun, the moon and the stars, Tlingit/Athabascan artist Rico Worl depicts Raven just as he escapes from his human family and begins to transform back into his bird form. Antonio Alcalá served as art director.

Western Wear
The U.S. Postal Service celebrates the enduring legacy of Western wear with four fun new Forever stamps in a booklet of 20. The stamp art features four graphic illustrations of Western wear staples — a cowboy hat, a cowboy boot with a spur, a Western shirt, and a belt buckle featuring a longhorn head. Each image is framed by elements common to the American West and iconography of the region, including cacti, snakes, roses and stars. Art director Greg Breeding designed the stamps with original art by Ryan Feerer.

Mid-Atlantic Lighthouses
The long-running series celebrating American lighthouses continues with five new stamps. The mid-Atlantic lighthouses featured in this issuance are: Thomas Point Shoal, MD; Montauk Point, NY; Harbor of Refuge, DE; Navesink, NJ; and Erie Harbor Pierhead, PA. The late Howard Koslow was the artist for these stamps as well as previous issuances in the Lighthouse series. Mid-Atlantic Lighthouses were the last stamps he illustrated for the Postal Service. The art director was Greg Breeding.

Espresso Drinks
America’s love of coffee is celebrated with four new stamps in a booklet of 20. Four digital illustrations feature cups of four different drinks: caffe latte, espresso, caffe mocha and cappuccino. The names of the espresso drinks appear in art-deco-inspired lettering above or below each cup. Art director Greg Breeding designed the stamps with original artwork by Terry Allen.

Happy Birthday
This Happy Birthday stamp conveys exuberant greetings by calling to mind the childhood excitement of a birthday party. Each of the five letters in the word “HAPPY” is inspired by a different party decoration in the midst of a flurry of multicolored ribbons and confetti. This stamp was designed by Lisa Catalone Castro and Rodolfo Castro, featuring a digital illustration by the latter. Ethel Kessler served as art director.