The U.S. Postal Service celebrates the 200th anniversary of the birth of “the Father of American poetry,” Walt Whitman, by honoring the poet with a new stamp in its Literary Arts series.

News about the stamp is being shared with the hashtag #WaltWhitmanStamps. 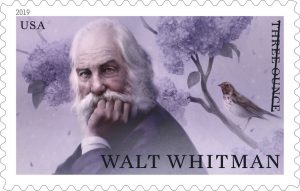 Born 200 years ago, poet Walt Whitman was one of the nation’s greatest champions. His writing aimed to embody the democratic ethos itself, using poetry to break down the artificial boundaries that separate man and woman, city and countryside, free and enslaved, poet and laborer — and ultimately the self and the universe.

The 1855 publication of “Leaves of Grass” marked the beginning of what would become Whitman’s lifelong masterwork. Over the next 40 years, he published several editions of the collection, which grew from 12 untitled pieces to nearly 400 poems.

Art director and designer Greg Breeding worked with artist Sam Weber to create this stamp. Additional details will be provided before the ceremony date.

The event is free and open to the public. All are welcome. Seating is first come, first served so plan to arrive early.

Customers may purchase stamps and other philatelic products through the Postal Store at usps.com/shop, by calling 800-STAMP24 (800-782-6724), by mail through USA Philatelic catalog or at Post Office locations nationwide.