With this pane of 16 stamps, the Postal Service brings Tyrannosaurus rex to life — some 66 million years after its demise.

The stamp dedication ceremony is free and open to the public, Thursday, Aug. 29, 2019, at 11:00 a.m. EDT, at the Smithsonian National Museum of Natural History’s Baird Auditorium, 10th Street and Constitution Avenue NW in Washington. News of the stamp is being shared with the hashtag #USPSTRexStamps.

Taking part in the ceremony are:

Dedication ceremony attendees are encouraged to RSVP at usps.com/trex.

Tyrannosaurus rex dominated the tail end of the dinosaur age. A recent surge in discoveries has revolutionized our understanding of the fierce carnivore.

Four dynamic designs on a pane of 16 stamps depict the awe-inspiring dinosaur in growth stages from infancy to adulthood. 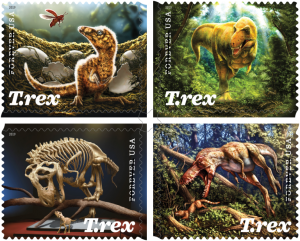 One design illustrates a face-to-face encounter with a T. rex approaching through a forest clearing; another shows the same young adult T. rex with a young Triceratops — both dinosaurs shown in fossil form.

“The Nation’s T. rex,” the young adult depicted on two of the stamps, was discovered on federal land in Montana and is one of the most studied and important specimens ever found. Its remains are now exhibited at the Smithsonian Institution’s National Museum of Natural History in Washington, DC. Art director Greg Breeding designed the stamps with original artwork by scientist and paleoartist Julius T. Csotonyi.

The Tyrannosaurus Rex stamps are being issued as Forever stamps. Forever stamps will always be equal in value to the current First-Class Mail 1-ounce price.