The first-day-of-issue event took place during the American Philatelic Society Stamp Show in Omaha. In the booklet of 20, each block of four stamps features a stylized geometric illustration of one of the canine breeds — German shepherd, Labrador retriever, Dutch shepherd and Belgian Malinois — that commonly serve in America’s armed forces. News of the stamp is being shared using the hashtag #MilitaryDogsStamps. 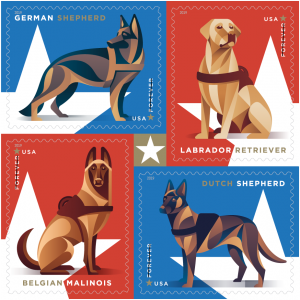 “As a military veteran and former law enforcement officer, I have the greatest appreciation for these animals and the service they provide,” said David C. Williams, vice chairman of the U.S. Postal Service Board of Governors, who served as the dedicating official for the ceremony. “Today, these dogs are born and raised to serve alongside soldiers, sailors, marines, airmen and women, and members of the Coast Guard. They are heroes deserving of our respect and gratitude.”

DKNG Studios created the stamp artwork by hand-sketching the dogs and then using Adobe Illustrator to bring them to life with basic shapes and layers of color. The red, white and blue color scheme represents the American flag and the patriotism displayed by military working dogs. The background of each stamp features a detail of a white star, and a star appears in the center of each block of four stamps. USPS Art Director Greg Breeding designed the stamps.

The military prizes retrievers, including Labradors, for their extraordinary sense of smell. Labrador retrievers are often trained as specialized search dogs.

Customers may purchase the Military Working Dogs stamps at The Postal Store at usps.com/shop, by calling 800-STAMP24 (800-782-6724), by mail through USA Philatelic or at Post Office locations nationwide. Forever stamps will always be equal in value to the current First-Class Mail 1-ounce price. Information on ordering first-day-of-issue postmarks and covers is at usps.com/shop under “Collectors.” A video of the ceremony will be available on Facebook.com/usps.