The U.S. Postal Service celebrates the USS Missouri (BB-63) with a Forever stamp. The famed American battleship is being honored to coincide with the 75th anniversary of her commissioning on June 11, 1944.

The battleship was affectionately nicknamed “Mighty Mo,” and had one of the most historic roles during World War II. On Sept. 2, 1945, military officials from the Allied powers and imperial Japan convened on her deck and signed the documents confirming Japan’s surrender and ending the war. 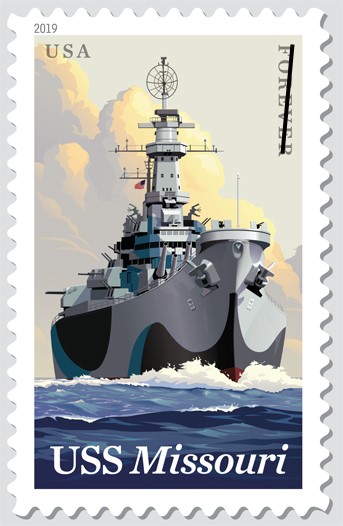 News of the stamp is being shared with the hashtags #USSMissouriStamps.

The stamp art depicts Missouri from a low vantage point almost at sea level, cutting through the water at a moderate speed commensurate with entering or leaving port. Large and imposing in the frame, Missouri is shown in the disruptive camouflage she wore from her commissioning until a refit in early 1945. Clouds loom in the background, tinged with gold and rose from the sun’s rays.

The USS Missouri stamp is being issued as a Forever stamps and will always be equal in value to the current First-Class Mail 1-ounce price.

Customers may purchase stamps and other philatelic products through the Postal Store at usps.com/shop, by calling 800-STAMP24 (800-782-6724), by mail through USA Philatelic or at Post Office locations nationwide.