DALLAS, TX — The U.S. Postal Service on Tuesday honored legendary tennis champion Maureen Connolly Brinker (1934–1969) at Southern Methodist University by issuing a Forever stamp graced with the nickname she was known for when she was the best in her sport: “Little Mo.”

In the early 1950s, the 5-foot-4-inch dynamo dominated the tennis world, using powerful groundstrokes to become the first woman to win all four major tennis tournaments in a calendar year. From 1951 to 1954, Connolly amassed nine major singles titles and three major doubles titles. For three years in a row, she was the top-ranked player in the world, and the Associated Press named her its “Woman Athlete of the Year” three straight years (1951—1953). 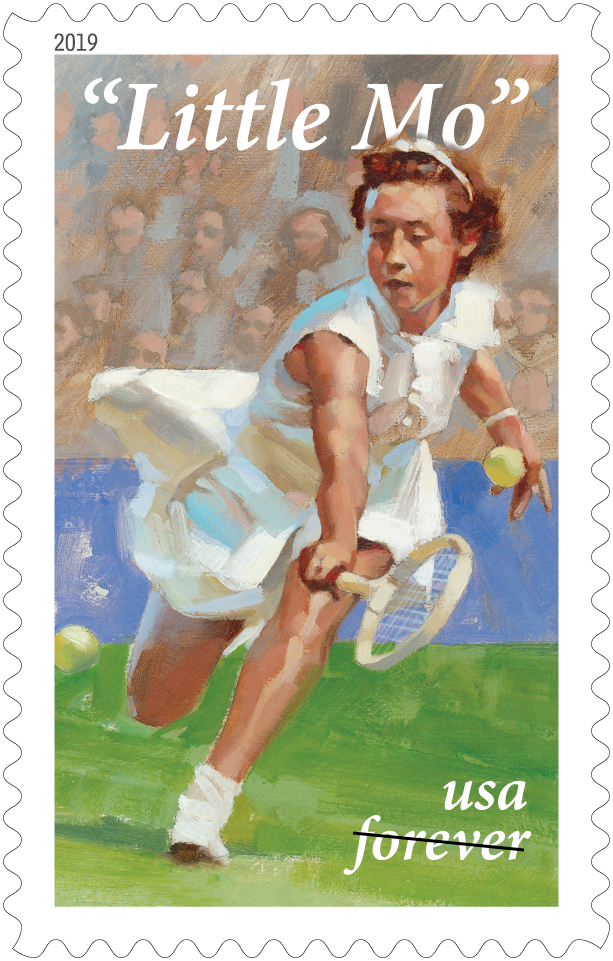 “The history-making tennis career of Maureen Connolly Brinker, combined with the gracious spirit she exhibited after her career abruptly ended, is emblematic of the type of character and courage that we strive to spotlight on our stamps,” said Janice Walker, vice president, U.S. Postal Service Corporate Communications, and the dedicating official of the stamp. “Being selected for this honor means that you have made an extraordinary and enduring contribution to American society, history, culture or the environment.”

The stamp features an oil-on-linen painting of the tennis star by Gregory Manchess. Based on a black-and-white photograph taken in 1952, the portrait is a colorful interpretation of Connolly hitting a low volley. Her nickname, “Little Mo,” runs across the top of the stamp, and “usa” and “forever” appear in the bottom right corner. Art director Derry Noyes designed the stamp. News of the stamp is being shared using the hashtags #LittleMoStamp and #TennisStamps.

Background on Maureen Connolly Brinker
Maureen Connolly began competing in the U.S. Lawn Tennis Association (USLTA) as a teenager and notched her first major singles tournament victory in 1951, winning the United States Championships (now called the U.S. Open) in Forest Hills, NY. The San Diego Union sportswriter Nelson Fisher once observed her hitting explosive forehands and backhands. He dubbed her “Little Mo,” after the battleship USS Missouri, which was sometimes referred to as “Big Mo.”

In 1952, she captured the Wimbledon crown for the first time. In 1953, she became the first woman to capture the single-season Grand Slam of tennis, winning the Australian Open, the French Open, Wimbledon, and the U.S. Championships. Along the way, she dropped only a single set. Since then, no American singles player has won all four majors in a calendar year. Only two men and three women in total have achieved that feat.

Connolly’s brilliant career ended abruptly in July 1954 when she severely injured her leg in a horseback riding accident. If she had not gotten hurt, the dominant Connolly likely would have gone on to win many more major tournaments.

In 1955, Connolly married Norman Brinker, who was part of the U.S. equestrian team at the 1952 Summer Olympics. He competed in the Modern Pentathlon Championships in 1954. They lived in Dallas and had two daughters. After her playing career, Connolly Brinker coached tennis and wrote articles about the game she once dominated. In 1968, she was inducted into the International Tennis Hall of Fame.

Until the end of her short life, Connolly Brinker was committed to introducing young people to tennis. In 1968, she co-founded the Maureen Connolly Brinker Tennis Foundation (MCB). Over the past 50 years, MCB has pioneered junior tennis development throughout the United States and worldwide.

On June 21, 1969, Connolly Brinker died of cancer at 34, but not before helping blaze a trail for today’s female athletes.

Customers may purchase the “Little Mo” Forever stamp at The Postal Store at usps.com/shop, by calling 800-STAMP24 (800-782-6724), by mail through USA Philatelic, or at Post Office locations nationwide. Forever stamps will always be equal in value to the current First-Class Mail 1-ounce price.

Information on ordering first-day-of-issue postmarks and covers is at usps.com/shop under “Collectors.” A video of the ceremony will be available on Facebook.com/usps.