LOS ANGELES — On what would have been Marvin Gaye’s 80th birthday, the U.S. Postal Service today honored the music legend with the dedication of a new commemorative Forever stamp during a first-day-of-issue ceremony at the Greek Theatre, where he once performed.

“The Postal Service is honored to recognize Marvin Gaye, the Motown legend, with a stamp on his birthday in this venue that held a special place in his heart,” said Gary R. Barksdale, chief postal inspector, U.S. Postal Service, and the stamp ceremony’s dedicating official. “Known as the ‘Prince of Soul,’ Gaye was a man whose timeless music was a true catalogue of human emotions that inspired, informed and entertained the world.” 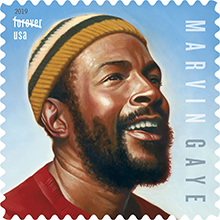 Gaye was one of the most influential music performers of his generation. He helped shape the buoyant sound of the Motown record label in the 1960s and broaden the scope of R&B music in the 1970s.

Released in 1971, his expansive masterwork, “What’s Going On,” is widely considered one of the greatest recordings in the history of American popular music.

The artwork for this stamp features a portrait of Marvin Gaye inspired by historic photographs. Gaye’s name appears vertically on the right side of the stamp. “USA” and the Forever denomination are in the top left. 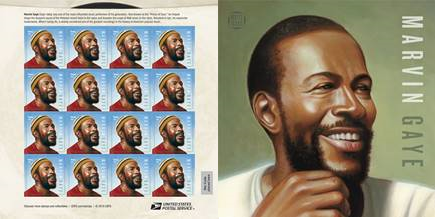 The stamp pane is designed to resemble a vintage 45-rpm record sleeve. One side of the pane includes the stamps and brief text about Gaye’s legacy, with the image of a sliver of a record seeming to peek out the top of the sleeve. Another portrait of Gaye, also inspired by historic photographs, appears on the reverse along with the Music Icons series logo.

In response to the stamp, members of the Gaye family offered the following comments.

“It brings me great pride and pleasure to see my father finally get a stamp,” said Marvin Gaye III. “Such a monumental achievement for his legacy. I want to thank Kadir Nelson for his God-given creative talent. What a remarkable rendition you’ve done. Bravo, man, for capturing my father’s true essence. It immediately drew me in when I first saw it. My father would be so pleased as much or more than I am. Thank you so much!”

“If our father could respond to the stamp’s artwork, we are sure that first of all he would find it a tremendous honor, as we do,” said daughter Nona and nephew Frankie Gaye in a written statement. “He would love the image itself because it shows the simplistic side of him. It shows him at his most comfortable, no suit and tie. He is relaxed. The image says peace and serenity. We know he would be pleased. Thank you to the USPS and Kadir Nelson.”

The Marvin Gaye stamp is being issued as a Forever stamp. This Forever stamp will always be equal in value to the current First-Class Mail 1-ounce price.

News of the stamp is being shared on social media using the hashtags #MarvinGayeStamp and #MusicIcons. Followers of the Postal Service’s Facebook page can view a recording of the ceremony at facebook.com/USPS.

Customers may purchase stamps and other philatelic products through the Postal Store at usps.com/shop, by calling 800-STAMP24 (800-782-6724), by mail through USA Philatelic or at Post Office locations nationwide.