WASHINGTON — In the spirit of the coming new year, the U.S. Postal Service today revealed several of the new Forever stamps and other stamps to be issued in 2019.

Since 1847, the stamp program has celebrated the people, events and cultural milestones unique to the history of the United States. The 2019 stamp subjects continue this rich tradition.

“The miniature works of art illustrated in the 2019 stamp program offer something for everyone’s interest about American history and culture,” said U.S. Postal Service Stamp Services Executive Director Mary-Anne Penner. “From legendary poet Walt Whitman to the entertainment genius of Gregory Hines to the majestic beauty of our Wild and Scenic Rivers, this program is diverse and wide ranging and tells America’s story on stamps.” 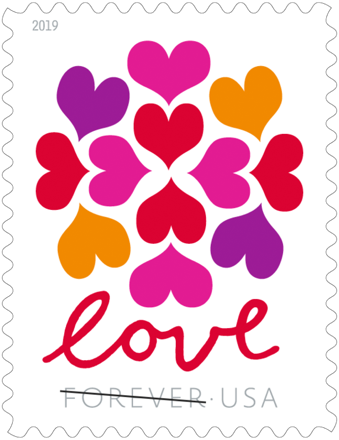 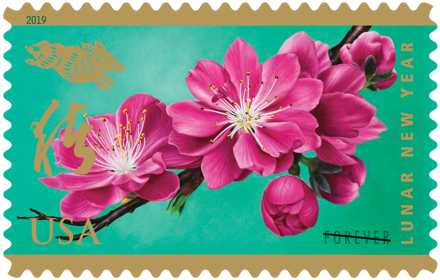 Year of the Boar
The Year of the Boar is the 12th and final stamp in the Celebrating Lunar New Year series. The Year of the Boar begins on Feb. 5, 2019, and ends on Jan. 24, 2020. The stamp art depicts several bright pink peach blossoms on a branch. Peach blossoms, which often bloom just in time for Lunar New Year, mark the beginning of spring in Chinese culture. Artist Kam Mak created this original painting. Art director and stamp designer Ethel Kessler incorporated elements from the previous series of Lunar New Year stamps — Clarence Lee’s cut-paper design of a boar and the Chinese character for “boar,” drawn in grass-style calligraphy by Lau Bun — to create continuity between the series.

Gregory Hines
The 42nd stamp in the Black Heritage series honors Gregory Hines (1946–2003), whose unique style of tap dancing injected new artistry and excitement into a traditional American form. A versatile performer who danced, acted and sang on Broadway, on television and in movies, Hines developed the entertainment traditions of tap into an art form for a younger generation and is credited with renewing interest in tap during the 1990s. Art director Derry Noyes designed the stamp, which features a 1988 photograph by Jack Mitchell.

Cactus Flowers
This issuance celebrates the beauty of cactus flowers with a booklet of 20 stamps. Each stamp depicts a photograph of the flower of one of these ten cacti: Opuntia engelmannii, Rebutia minuscula, Echinocereus dasyacanthus, Echinocereus poselgeri, Echinocereus coccineus, Pelecyphora aselliformis, Parodia microsperma, Echinocactus horizonthalonius, Thelocactus heterochromus and Parodia scopa. Within the booklet, each stamp design is featured twice. With new DNA studies, botanists sometimes reclassify plants. As of the printing of these stamps, the scientific names were accurate. Cacti also have common names, with some plants having several different names in popular use. Art director Ethel Kessler designed the stamps with existing photographs taken by John P. Schaefer. 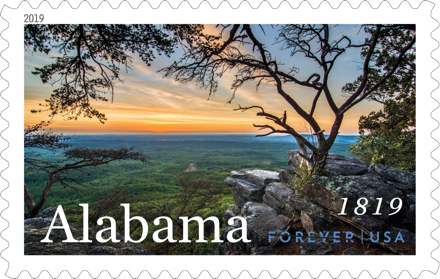 Alabama Statehood
This stamp celebrates the bicentennial of Alabama statehood. Alabama became the 22nd state in the Union on Dec. 14, 1819. The stamp art is a photograph taken at sunset in Cheaha State Park. Alabama photographer Joe Miller took the picture from the park’s Pulpit Rock Trail. With Pulpit Rock in the foreground, most of the area in the valley below the overlook is part of the Talladega National Forest, which surrounds the state park. The name of the state and the year of statehood are included in the stamp art. The art director is William J. Gicker. Greg Breeding designed the stamp with Miller’s existing photograph. 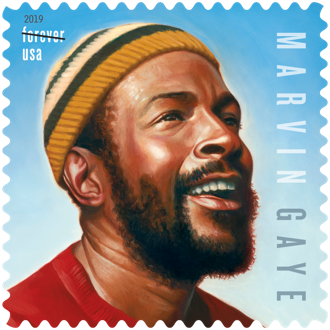 Marvin Gaye
With this new stamp in the Music Icons series, the U.S. Postal Service honors Marvin Gaye (1939–1984) — the “Prince of Soul” — one of the most influential music performers of his generation. The stamp design features a portrait of Gaye inspired by historic photographs. The stamp pane is designed to resemble a vintage 45 rpm record sleeve. One side of the pane includes the stamps, brief text about Gaye’s legacy, and the image of a sliver of a record seeming to peek out the top of the sleeve. Another portrait of Gaye, also inspired by historic photographs, appears on the reverse along with the Music Icons series logo. Art director Derry Noyes designed the stamp pane with original art by Kadir Nelson. 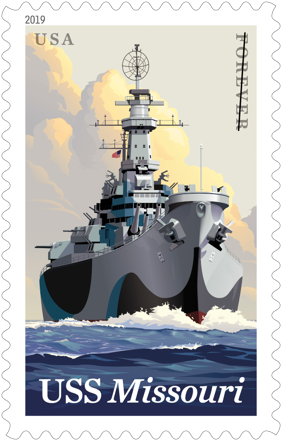 USS “Missouri”
The Postal Service celebrates USS Missouri (BB-63), America’s last battleship, with the issuance of a commemorative stamp in 2019, coinciding with the 75th anniversary of Missouri’s commissioning on June 11, 1944. The stamp art depicts Missouri in the disruptive camouflage she wore from her commissioning until a refit in early 1945. Missouri earned numerous combat awards and citations during her decades of service, which include World War II, the Korean War and Operation Desert Storm. She played a momentous role when she hosted the ceremony marking Japan’s surrender and the end of World War II. Designed by art director Greg Breeding, the stamp features a digital illustration by Dan Cosgrove.

Post Office Murals
This pane of 10 stamps features five different murals designed to add a touch of beauty to Post Office walls and help boost the morale of Americans during the era of the Great Depression. On the stamp art, the town or city and state in which the work of art is located is printed underneath each mural. The murals included are: “Kiowas Moving Camp” (1936) Anadarko, Oklahoma; “Mountains and Yucca” (1937) Deming, New Mexico; “Antelope” (1939) Florence, Colorado; “Sugarloaf Mountain” (1940) Rockville, Maryland; and “Air Mail” (1941) Piggott, Arkansas. Art director Antonio Alcalá designed the stamps. 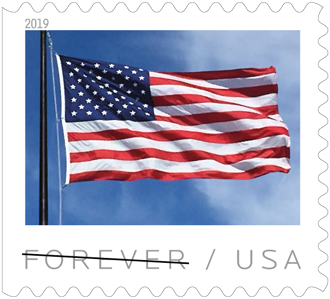 US Flag
With this new 2019 stamp, the Postal Service celebrates the American flag, the most recognizable symbol of our nation. The stamp features a U.S. flag, one of several on the flagpoles near the end of Chicago’s Navy Pier, waving in a May breeze. The photograph was taken by art director Antonio Alcalá. 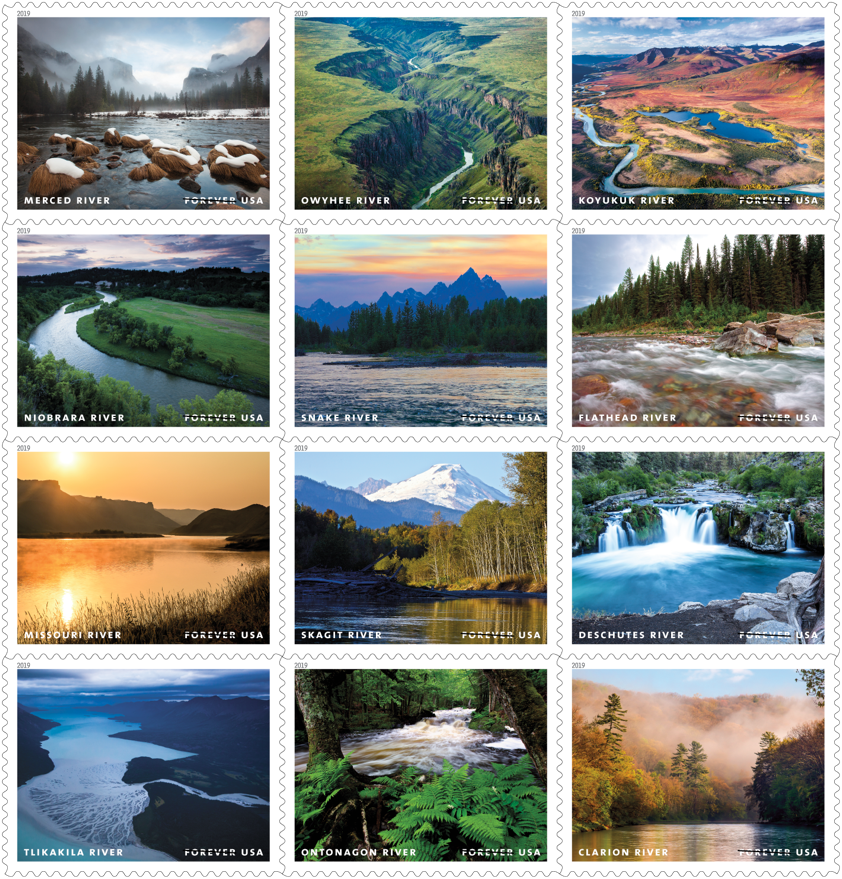 Walt Whitman
With this stamp, the 32nd in the Literary Arts series, the Postal Service honors poet Walt Whitman (1819–1892) on the bicentennial of his birth. The stamp features a portrait of Whitman based on a photograph taken by Frank Pearsall in 1869. In the background, a hermit thrush sitting on the branch of a lilac bush recalls “When Lilacs Last in the Door-yard Bloom’d,” an elegy for President Abraham Lincoln written by Whitman soon after Lincoln’s assassination on April 14, 1865. Considered by many to be the father of modern American poetry, Whitman broke away from dominant European poetic forms and experimented with free verse and colloquial expressions, writing powerfully about nearly every aspect of 19th-century America. The artist for the stamp was Sam Weber. Art director Greg Breeding designed the stamp. The words “THREE OUNCE” on this stamp indicate its usage value. Like a Forever stamp, this stamp will always be valid for the rate printed on it. 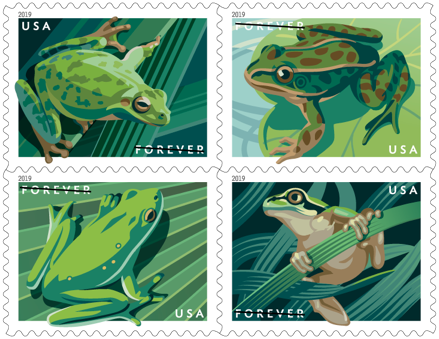 State and County Fairs
Four whimsical se-tenant stamps celebrate the fun of America’s state and county fairs. The stamps were designed to work together as a panorama of fair activities, while each stamp also works as an individual picture. The stamp on the far left shows farmers unloading produce behind a white fence. In the second stamp, a child holding a chicken sits atop the same fence, with carnival rides — a Ferris wheel and merry-go-round — in the background. Those rides can be seen in the third stamp, where some fairgoers admire the livestock behind the fence while others walk, balloons in hand, toward a sweets stand. The last stamp shows children at the stand buying treats from the vendor. The art director was Greg Breeding. Mike Ryan designed the stamps with original art by Mick Wiggins.

Woodstock
This stamp issuance celebrates the 50th anniversary of the Woodstock Music and Art Fair, held in the small farming community of Bethel, New York, in August 1969. It was the most famous rock festival in history and an expression of the youth counterculture of the 1960s. The stamp art, designed by art director Antonio Alcalá, features the image of the dove from graphic artist Arnold Skolnick’s promotional 1969 poster for the festival along with some of the poster’s words: “3 Days of Peace and Music.” In the stamp art the words are stacked in the background in brilliant colors along with the year 1969, USA, and Forever (the value of the stamp). The white dove stands in the foreground. 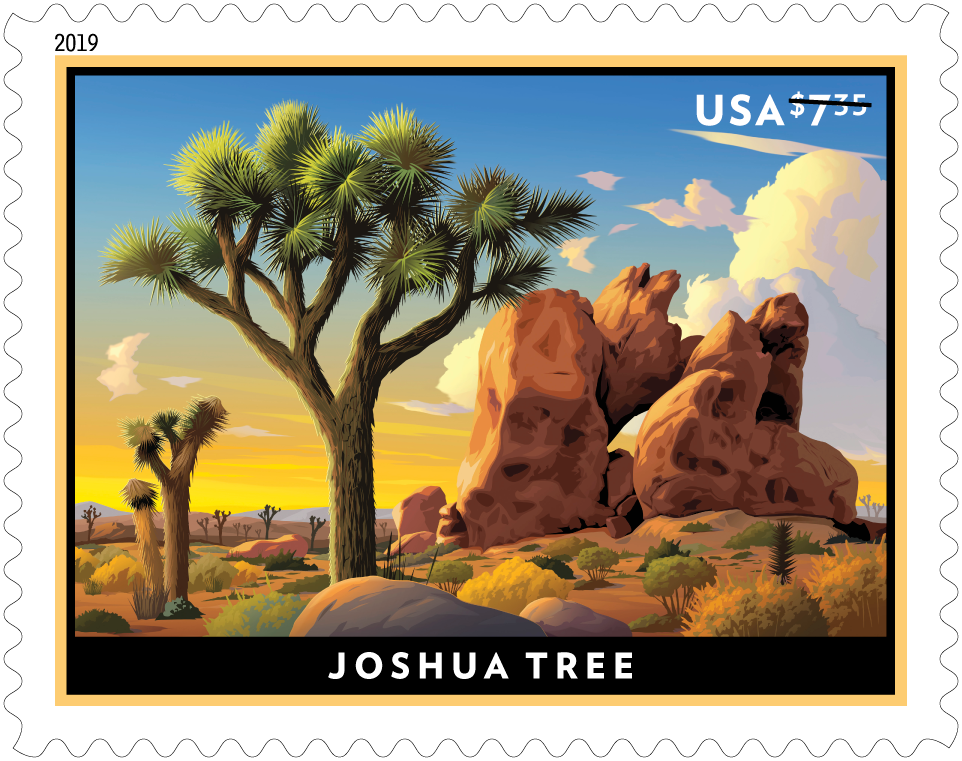 Joshua Tree
Celebrating the desolate beauty of the Joshua tree (Yucca brevifolia) and its distinct desert environment, this Priority Mail stamp depicts a common scene throughout much of the Mojave and Sonoran Deserts. Using the bold colors of the sun’s reflection off of the trees, rocks, and other shrubby vegetation, artist Dan Cosgrove illuminates the desert scene in warm, golden hues. Art director Greg Breeding designed the stamp. 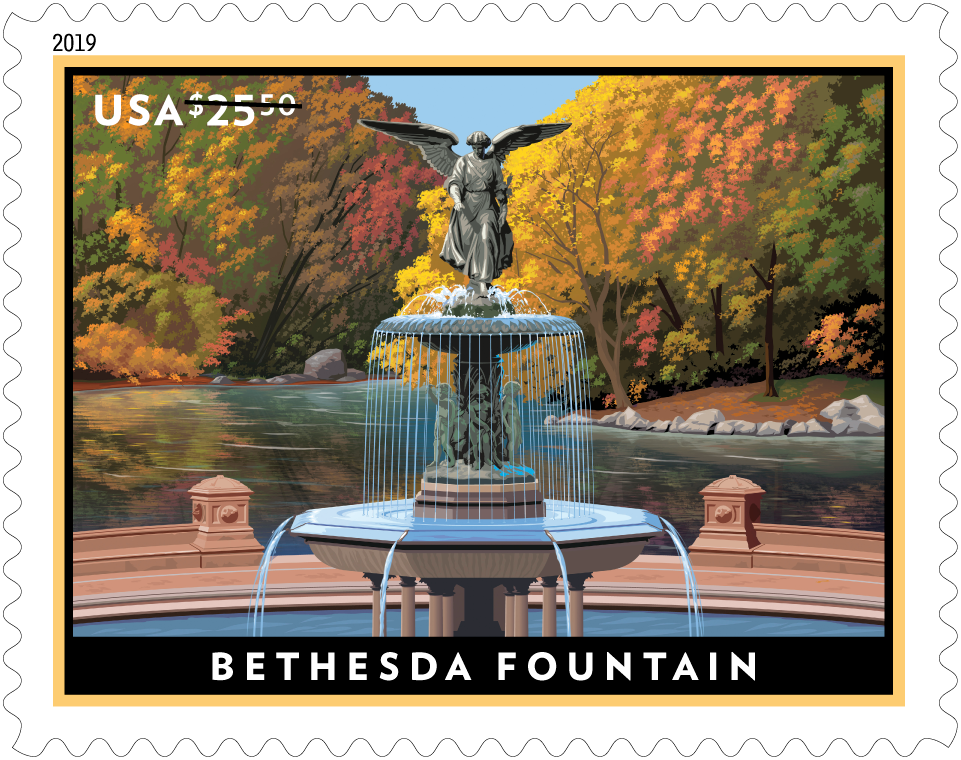 Bethesda Fountain
With this Priority Mail Express stamp, the Postal Service commemorates the Bethesda Fountain, one of Central Park’s most iconic structures. Dedicated in 1873, the fountain is a gathering place beloved by New Yorkers and out-of-town visitors alike. The stamp art features a stylized depiction of the fountain. The illustration was first rendered as a pencil sketch and then scanned and finished digitally. Art director Greg Breeding designed the stamp with original art by Dan Cosgrove. 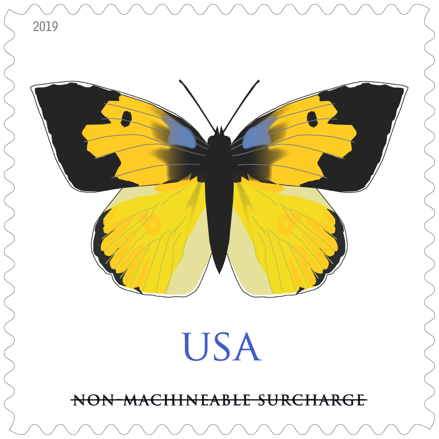 California Dogface
The California dogface graces the seventh non-machineable butterfly stamp for use on irregularly sized envelopes, such as square greeting cards, invitations or announcements. The stamp art was digitally created using images of preserved butterflies as a starting point. The result is a highly stylized, simplified image of a California dogface (Zerene eurydice) rather than an exact replica. Nationally known artist Tom Engeman created the stamp art. Art director Derry Noyes designed the stamp.

US Flag Stamp Envelope
A familiar sight on public buildings and private homes alike, the American flag has been portrayed in myriad ways on U.S. postage. This stamped envelope features a graphic design of the flag that evokes a rich sense of history even as it presents a recognizable icon in a fresh, contemporary way. Kit Hinrichs created the artwork for this stamped envelope. Ethel Kessler served as art director.