NEWPORT, RI — The U.S. Postal Service and Israel Post today jointly issued a Hanukkah stamp that portrays a papercut menorah that can be used to send holiday messages celebrating this ageless tradition.

The public is invited to share the news using the hashtag #HanukkahStamps. 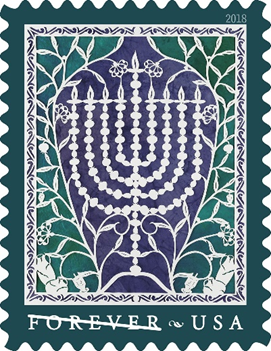 “The stamp we’re celebrating today depicts an image of the Hanukkah menorah created through papercutting — a Jewish art form that dates at least to the Middle Ages,” said Postal Service Judicial Officer Gary Shapiro. “Starting today, this work of art celebrating the Jewish Festival of Lights will travel on millions of letters and packages, throughout America and around the world.”

The Jewish holiday of Hanukkah celebrates the liberation and reconsecration of the Temple in Jerusalem in the second century B.C. Hanukkah is the Hebrew word for “dedication.” Tradition relates that during the rededication, there was only enough sacramental oil to light the Temple lamps for one day; however, the lamps burned for eight days. This is re-enacted during Hanukkah with the ritual lighting of the hanukiah, a menorah — candelabra — with nine branches. Eight branches hold candles representing each of the eight nights and days of Hanukkah; the ninth, the shamash or “servant,” is used to light the other candles.

Hanukkah is a family-centered holiday, with the celebrations taking place in people’s homes. Games, songs, gifts, and food — including traditional fried food like latkes and doughnuts called sufganiyot — all contribute to holiday traditions.

Hanukkah begins on the 25th of Kislev in the Hebrew calendar, a date that falls in late November or December. In 2018, Hanukkah begins at sundown Dec. 2.

Tamar Fishman created the original art for the stamp and Ethel Kessler was the stamp designer.

Hanukkah is being issued as a Forever stamp. A Forever stamp is always equal in value to the current First-Class Mail 1-ounce price.

Customers may purchase these stamps and other philatelic products through the Postal Store at usps.com/shop, by calling 800-STAMP24 (800-782-6724), by mail through USA Philatelic, or at Post Office locations nationwide.

Information on ordering first-day-of-issue postmarks and covers is at usps.com/shop under “Collectors.” A video of the ceremony will be available on the Postal Service’s Facebook page.