On Friday, July 27, 2018, the US Postal Service will issue the “Turning the Tide” Forever stamp commemorating the one hundredth anniversary of US involvement in World War I.

The ceremony will take place at 11:30 a.m. Central Daylight Time, at the National WWI Museum and Memorial in Kansas City, MO. Followers of the U.S. Postal Service’s Facebook page can view the ceremony live at facebook.com/USPS. 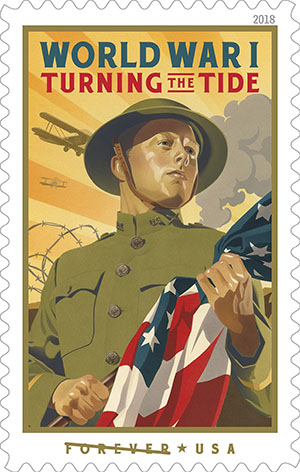 Background:  World War I was a devastating four-year global conflict (1914-1918) that reshaped the map of Europe. The United States remained neutral in the war until April 1917, when the nation declared war on Germany and entered on the side of the Allies — Britain, France and Russia.

The American Expeditionary Force, which ultimately grew to nearly 5 million troops, did not see major action until the spring of 1918. Then, in six months of intense combat, American troops played an indispensable role in turning the tide of war in favor of the Allies.

The Postal Service pays tribute to the sacrifice of these and countless other Americans—including millions of supporters on the home front — who experienced the seminal conflict of the 20th century.

Source: Honoring the Vital Role of American Troops in the First World War