SAN DIEGO — Sally Ride, America’s first woman in space, a pioneering astronaut, brilliant physicist and dedicated educator who inspired the nation, will be commemorated on a Forever stamp today. Share the news using the hashtags #SallyRideForever and #AstronautStamps.

The Sally Ride Forever stamp 5 p.m. PDT dedication ceremony, free and open to the public, will take place at the Price Center, University of California San Diego. Ride served as a professor of physics at the university, which also is home to Sally Ride Science @ U C San Diego, a non-profit organization she co-founded to inspire young people in science, engineering, technology and math (STEM) and to promote STEM literacy. 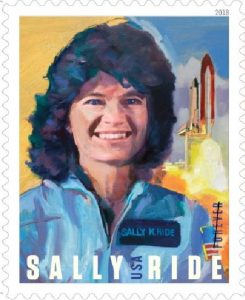 Followers of the U.S. Postal Service’s Facebook page can view the ceremony live at Facebook.com/USPS. The stamps may be pre-ordered now at this link for delivery shortly after tomorrow’s issuance.

“Sally Ride’s history-making journey has made it easier for young girls to dream of one day being an astronaut, an engineer, a physicist or a mathematician. Today, girls don’t just dream. Because of trailblazers like Sally Ride, they have been empowered to do!” said U.S. Postal Service Chief Information Officer and Executive Vice President Kristin Seaver.

“Sally started collecting stamps when she was a girl, and she continued to do so her whole life —especially stamps of the Olympics and space exploration,” said O’Shaughnessy. “Sally would be deeply honored to have her portrait on a U.S. stamp.”

“I admired Sally for her intellect that she applied as a scientist, her focus and passion for STEM education, and her astounding competence in so many areas, including her critical contributions to NASA and the nation,” said Ochoa. “As much in demand as she was, she always made time to meet with young women who dreamed of becoming astronauts. I am thrilled to be part of the Sally Ride Forever stamp dedication, continuing her legacy of inspiring people across the country, and indeed around the world.”

The stamp art features a colorful portrait of Ride in her light blue space suit with a dramatic depiction of a space shuttle lifting off in the background. Sketched first in charcoal and then rendered in oil paint, artist Paul Salmonof Burke, VA, reflects her positivity and confident spirit, as well as the excitement and danger of space travel. Art director Ethel Kessler of Bethesda, MD, designed the stamp.

Her Legacy
Ride galvanized the country with her pioneering space flight and inspired generations of students as a physicist, astronaut and champion of science education.

After completing her doctorate in physics, Ride joined NASA’s 1978 class of astronaut candidates for the agency’s new space shuttle program. She was the first woman to serve as a capsule communicator for Columbia’s second flight in 1981, communicating from the ground with both the shuttle crew in space and the flight director at Mission Control. In spring 1982, NASA assigned her to her first flight crew as a mission specialist.

On June 18, 1983, at 7:33 a.m., Ride realized her ultimate adventure when she launched through Earth’s atmosphere aboard space shuttle Challenger, becoming the first American woman to reach space. For six days, she worked closely with her four male crewmates, proving to the world below that women were as adept as men in the final frontier. She completed a second successful trip to space the next year, breaking another barrier as a member of the first flight crew with two women.

Ride was the only person to sit on the investigative panels for both the Challenger and Columbia accidents. As a professor, she used her experiences in space to explain complicated physics concepts. She also co-authored six children’s books about science with O’Shaughnessy. In 2001, Ride and O’Shaughnessy joined three friends to start a science education company, Sally Ride Science, with the goal of narrowing the gender gap in science, technology, engineering and math.

The Sally Ride stamp is being issued as a Forever stamp. This Forever stamp will always be equal in value to the current First-Class Mail 1-ounce price.

Stamp ideas welcome
The public is encouraged to submit stamp suggestions. Visit the Citizens’ Stamp Advisory Committeewebsite for details on the stamp selection process and instructions for submitting suggestions in writing. Due to the time required for research and approval, ideas for stamp subjects should be received at least three years prior to the proposed release. Each submission should include pertinent historical information and important dates associated with the subject.

After applying the first-day-of-issue postmark, the Postal Service will return the envelopes through the mail. There is no charge for postmarks up to a quantity of 50. For more than 50, customers are charged 5 cents each. All orders must be postmarked by September 23, 2018.

Ordering first-day covers
The Postal Service also offers first-day covers for new stamps and stationery items postmarked with the official first-day-of-issue cancellation. Each item has an individual catalog number and is offered in the USA Philatelic publication and online at usps.com/shop. Customers may register to receive a free USA Philatelic publication online at usps.com/philatelic.

You may view many of this year’s other stamps on Facebook at facebook.com/USPSStamps or via Twitter @USPSstamps. All postage stamps are available for purchase at Post Office locations, online at usps.com and by toll-free phone order at 1-800 STAMP-24.