On Monday, April 24, the Congressional Joint Committee on Taxation released a report on the 2017 tax bill and its effect on U.S. taxpayers. The press stories focused on the winners and losers from the tax cuts – most notably, that 87 percent of the tax cuts go to corporations and the wealthy, and that millionaires stand to reap $17 billion from the legislation in 2018 alone.

But the bigger news for letter carriers came from another source on Capitol Hill last week. On April 17, the Congressional Budget Office issued its latest budget outlook. It found that the federal budget deficit is exploding, thanks mostly to the 2017 tax cut, but also due to the 2018 spending bill adopted earlier this year.  The CBO says that the deficit will rise to more than $1 trillion in 2020 and by an additional 50 percent by 2028. This means that budget-cut proposals aimed at our retirement and health benefits are much more likely to be pushed (see: https://www.nalc.org/government-affairs/legislative-updates/white-house-fy-2019-budget-proposal). 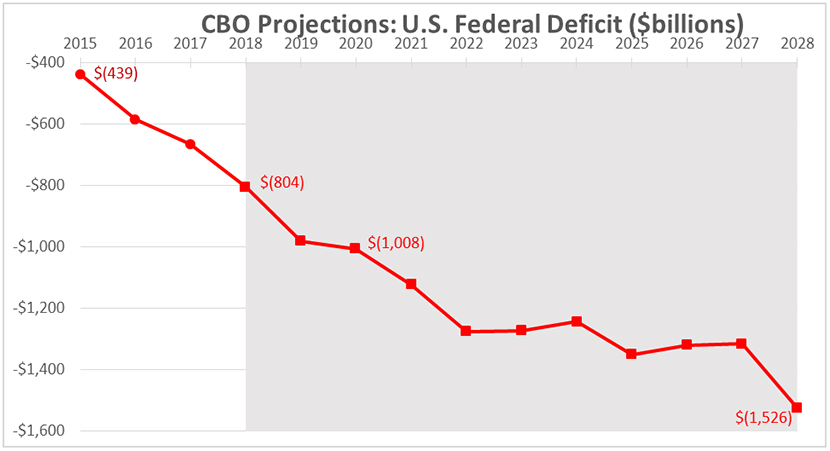 Deficits are not inherently bad. It depends on the circumstances and what the government does with the borrowed money. When the economy is in deep recession (as in 2008-2010), deficits can speed an economic recovery and lessen the pain of unemployment by putting people to work.  Much the same applies if the funds are used to improve our infrastructure, as productivity rises and the future capacity of our economy increases.  But when the economy is at full employment or resources are directed to wealthy households and companies sitting on record un-invested cash balances (as is happening now), the deficits can do more harm than good. Inflation can result – or, as we see now, inequality can rise.

According to a study by Americans for Tax Fairness, companies are spending 37 times more on stock buy-backs (sending cash to shareholders) than they are on wage increases or one-time bonuses (see https://americansfortaxfairness.org/key-facts-american-corporations-really-trump-tax-cuts/).

So while letter carriers can certainly enjoy the modest tax cuts we get this year, the cost of those tax cuts could be high. We must be ready to defend our benefits and jobs from the deficit-reduction fights that are sure to come next.