When you fill out an application for a job at the US Postal Service, you’re warned that making false statements is a federal crime. Last year, former USPS Vice President Bill Whitman Jr. found out that the USPS takes that warning seriously when he was sentenced to two months in prison for lying on his application, as well as a security clearance form.

The USPS kept the story under wraps for over three years. It only came to light earlier this year when the Office of Inspector General mentioned the case in its semi-annual report to Congress:

We investigated an allegation that a former Postal Service vice president made multiple false statements on his SF-86 background questionnaire and financial disclosure reports. The investigation was referred for prosecution. The former vice president was sentenced to two months of incarceration and one year of supervised release, and was also ordered to pay restitution of $84,500.

The report did not include the individual’s name or full title. The cryptic mention was noticed by postalmag.com editor Tom Wakefield who highlighted the mystery on his web site. McAllister, on hearing about the story, was able to uncover Whitman’s identity after Freedom of Information Act inquiries. 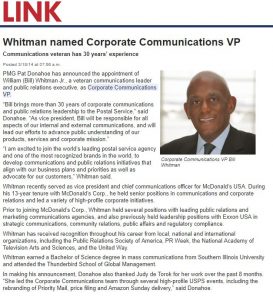 Whitman had been hired as Corporate Communications VP by then PMG Pat Donahoe in March 2014 after an apparently successful tenure as a public relations exec at McDonalds and a number of other companies. What Donahoe didn’t know at the time was that Whitman’s resume had a number of falsehoods, including the fact that he had allegedly been fired from a previous job for lying on his resume! It was also alleged that Whitman falsely claimed he had a degree from Southern Illinois University. Once the false statements were discovered, Whitman was fired, with no public announcement. The only clue as to wahat happened was the disappearance of Whitman’s name from the USPS web site’s “Leadership” page, replaced with “Vacant”. 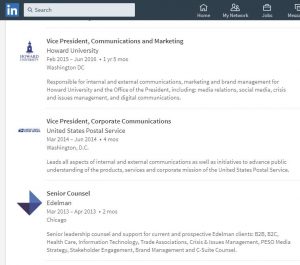 Amazingly, despite being fired by the USPS, Whitman was later able to get a job in February 2015 as a VP at Howard University! He was indicted in August of 2015, but remained in his position at Howard until June of 2016.

And just as amazing- Whitman’s resume on LinkedIn still includes his four month stint as a USPS VP- (with no mention as to why he left so soon) It also includes his even shorter stay at Edelman, a Chicago PR firm, where Whitman was employed for just two months before leaving in April 2013. The  original indictment filed against Whitman accused him of lying about the fact that he had been fired by an unnamed corporation in April 2013.

The USPS referred the case to the OIG, and eventually the Department of Justice for prosecution. Whitman entered into a plea agreement, was sentenced to prison, and ordered to repay the money USPS had given him for moving expenses and a $35,000 “signing bonus”.

Whitman was scheduled to “self-surrender” himself in September of this year to begin serving his prison term. In September his attorney filed an emergency motion to delay his surrender by 30 days. In the filing, Whitman said he had been unable to find employment since leaving Howard, and needed the additional time to find housing for himself and his wife.

The Judge approved the request. Whitman’s twitter account, which had previously been quite active, has had no entries since October 18. This is the tweet pinned to the top of his feed:

Under the revised schedule, Whitman would have been released from prison yesterday.