WASHINGTON — With a new year just around the corner, the U.S. Postal Service is raising the curtain to provide a sneak peek at a portion of its 2018 stamp program.

Icons such as Lena Horne, John Lennon and Sally Ride and will be immortalized on Forever stamps next year. Stunning photographs of America’s dramatic landscapes will commemorate the song “America the Beautiful.”

Other diverse and educational stamps on deck for 2018 will:

Detailed information and issuance dates on these stamps and others will be revealed later. All stamp designs are preliminary and are subject to change until issuance dates. 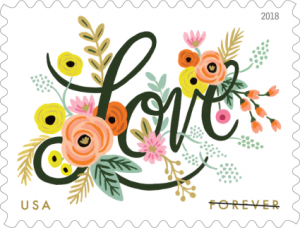 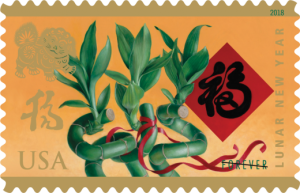 Lena Horne (Black Heritage series)
The 41st issuance in the Black Heritage series honors the achievements of legendary performer and civil rights activist Lena Horne (1917–2010). Remembered as one of America’s great interpreters of popular songs, Horne also was a trailblazer in Hollywood for women of color. She used her personal elegance, charisma and fame to become an important spokesperson for civil rights. 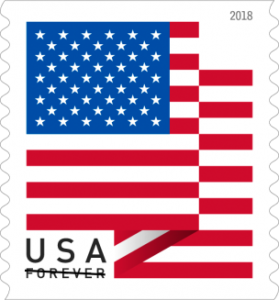 U.S. Flag
For more than half a century, U.S. stamps have depicted the American flag in vivid red, white and blue. This eye-catching new issuance continues that tradition with a striking graphic design of a flag with two crisp folds. 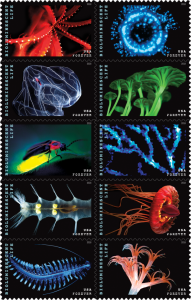 Bioluminescent Life
This issuance celebrates the phenomenon of bioluminescence — the ability of some species to glow — with a pane of 20 stamps featuring 10 life-forms that create their own light. 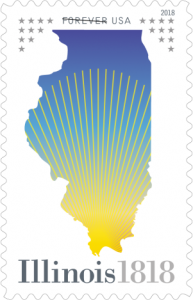 Illinois Statehood (Statehood series)
This stamp celebrates the 200th anniversary of Illinois statehood. Known as the Prairie State, Illinois became the 21st state of the union on Dec. 3, 1818. 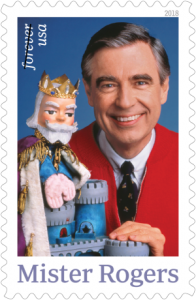 STEM Education
These Forever stamps celebrate the role of science, technology, engineering and mathematics (STEM) education in keeping our nation a global leader in innovation. Designed to pique the curiosity of the viewer, each of these four stamps features a collage of faces, symbols, drawings and numbers that represent the complexity and interconnectedness of the STEM disciplines. 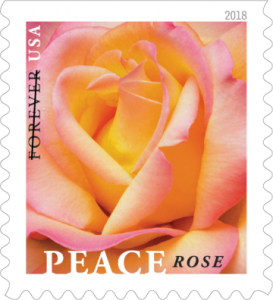 Peace Rose
Peace Rose celebrates one of the most popular roses of all time. The peace rose revolutionized hybrid tea roses with its unique coloring, hardiness, and disease resistance. 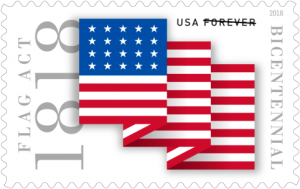 Flag Act of 1818
With this stamp, the Postal Service marks the 200th anniversary of the Flag Act of 1818, which gave us the basic design of the current American flag: 13 stripes symbolizing the original 13 colonies and one star for each state in the union. 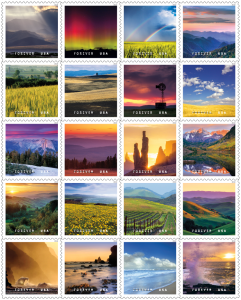 O Beautiful
With the release of O Beautiful, the Postal Service commemorates the beauty and majesty of the United States through images that correspond with one of the nation’s most beloved songs, “America the Beautiful.” 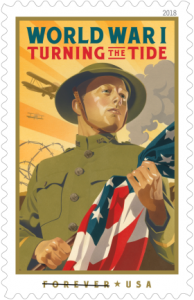 World War I: Turning the Tide
With this stamp, the Postal Service pays tribute to the sacrifice of American soldiers and millions of supporters on the home front who experienced World War I. Entering World War I (1914–1918) in its later stages, the United States helped turn the tide of war in favor of the Allies.

Dragons
The Postal Service celebrates dragons, the high-flying, fire-breathing mythological creatures that have roamed our imaginations for millennia. 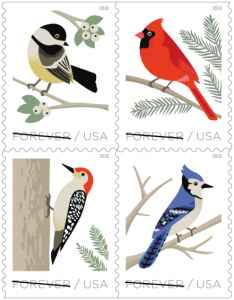 The Art of Magic
The Postal Service celebrates the art of magic with this pane of 20 stamps featuring digital illustrations of five classic tricks magicians use to amaze and delight audiences: a rabbit in a hat (production), a fortune teller using a crystal ball (prediction), a woman floating in the air (levitation), an empty bird cage (vanishing), and a bird emerging from a flower (transformation). 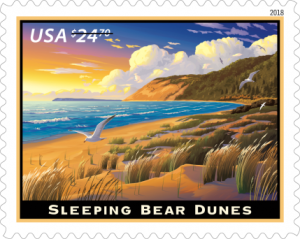 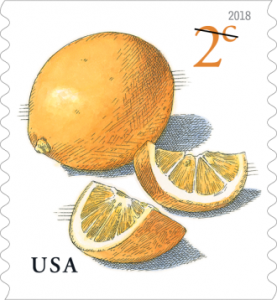 Meyer Lemons
Meyer Lemons is a 2-cent definitive stamp. The stamp art features a whole Meyer lemon next to two wedges of the cut fruit.

Stamp ideas welcome
The public is encouraged to submit stamp suggestions. Visit this link for details on the stamp selection process and instructions for submitting suggestions in writing. Due to the time required for research and approval, ideas for stamp subjects should be received at least three years prior to proposed release. Each submission should include pertinent historical information and important dates associated with the subject.