WASHINGTON — Whether you’re celebrating the holidays or other special occasions, the U.S. Postal Service offers a variety of Forever stamp to help make it memorable.

“Writing greeting cards has been a cherished holiday family tradition since the 1800s,” said U.S. Postal Service Director of Stamp Services Mary-Anne Penner. “No matter what the occasion, we hope Americans will take advantage of our unique selection of Forever stamps as they extend their best wishes to friends, family and loved ones.”

Penner also noted that customers can save a trip to the Post Office by purchasing the stamps online at usps.com/shopor by calling 800-STAMP24 (800-782-6724). 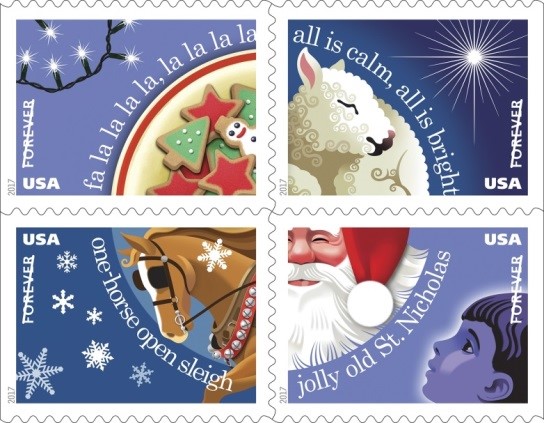 Christmas Carols
The U.S. Postal Service celebrates the Christmas season with four new Forever stamps featuring images that illustrate a major theme of each of four beloved Christmas carols: “Jingle Bells,” “Deck the Halls,” “Silent Night,” and “Jolly Old Saint Nicholas.” Familiar lines from each song highlight the individual stamps. The shades of blue in the backgrounds of the stamps evoke the evening scenes from the four carols.

Diwali
Also known as Deepavali, the Hindu festival Diwali celebrates the triumph of good over evil. This Forever stamp features a photograph of a traditional diya oil lamp beautifully lit, sitting on a sparkling gold background. Diya lamps, used in Diwali celebrations, are usually made from clay with cotton wicks dipped in a clarified butter known as “ghee” or in vegetable oils.

Spanning five days each autumn, Diwali is considered by some to be the start of the new year. On the Hindu calendar, Diwali falls on the eve of or on, the new moon that occurs between mid-October and mid-November.

Eid Greetings
Featuring a design that evokes centuries of tradition, this stamp commemorates the two most important festivals — or eids — in the Islamic calendar: Eid al-Fitr and Eid al-Adha. The gold-colored calligraphy on this Forever stamp was created by world-renowned calligrapher Mohamed Zakariya of Arlington, VA. The script reads Eidukum mubarak, “May your Eid be bountiful (or blessed).”

Florentine Madonna and Child
This Christmas stamp features a detail of Madonna and Child, a 15th-century tempera-on-panel painting dated to circa 1470 and created by an anonymous artist known only as “a Follower of Fra Filippo Lippi and Pesellino.” Art historians have speculated that the painter may have had preparatory drawings or close copies of the works of the masters he imitated, and that a relationship may have existed between those artists’ workshops and the workshop of this anonymous painter. 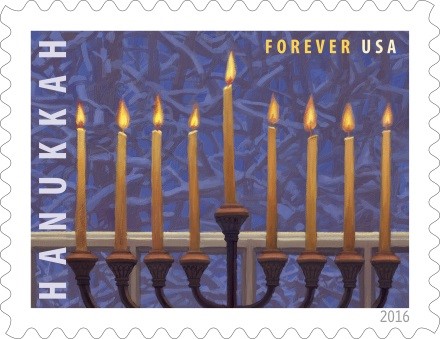 Hanukkah
The 2016 Hanukkah stamp features a warm, elegant illustration of a holiday menorah in the window of a home. Traditionally, the menorah is displayed in a doorway or window to proclaim the miracle of Hanukkah. Hanukkah spans eight nights and days of remembrance and ritual. The eight nights and days of Hanukkah begin on the 25th of Kislev in the Hebrew calendar, a date that falls in late November or December. Hanukkah begins this year at sundown on December 12.

Holiday Windows
With four warm, inviting illustrations of winter scenes featuring windows, the Holiday Windows Forever stamps rejoice in the simple pleasures of the season. Recalling nostalgic winter nights, these stamps highlight the role windows play during various holiday observations and convey the joyful and reverent spirit of the season.

Kwanzaa
This bright and colorful Forever stamp design celebrates the annual non-religious holiday of Kwanzaa, which will be observed over seven days from December 26, 2017, to January 1, 2018. First celebrated in 1966, Kwanzaa derives its name from the phrase “first fruits” in Swahili and honors the African-American family, community and culture.

Nativity
The Postal Service celebrates Christmas with a Forever stamp featuring a traditional Nativity scene. The stamp art depicts a peaceful yet powerful image of the Holy Family silhouetted against a dawn sky. The baby Jesus lies in a straw-filled manger in the center of the picture with Mary kneeling to the right and Joseph standing to the left, holding a lantern. A bright star shines over the scene. The Gospel of Luke relates how Mary and Joseph traveled to Bethlehem to register for the census decreed by the Roman emperor. The Nativity stamps may be in limited supply at local Post Offices due to high demand. The easiest way to purchase the stamps is at this link.

Neon Celebrate!
Good times call for good wishes. Bringing an extra wish for happiness to anyone celebrating a special time, this Forever stamp features a brilliantly colored design depicting neon and glass that adds a spark to greeting cards, invitations and gift-bearing envelopes and packages.

Patriotic Spiral
This festive and energetic stamp design features 50 blue and red stars spiraling around a central gold star on a white background. The idea for the design was to illustrate a community of stars protectively orbiting a central star.

The Snowy Day
The U.S. Postal Service showcases the work of Ezra Jack Keats’ most beloved story, The Snowy Day, on four Forever stamps. Written and illustrated by the celebrated children’s author, it was one of the first prominent 20th-century picture books devoted to an African-American child. Each of the stamps features a different illustration of main character Peter exploring and playing in his neighborhood while wearing his iconic red snowsuit. The images include: Peter forming a snowball, Peter sliding down a mountain of snow, Peter making a snow angel and Peter leaving footprints in the snow. 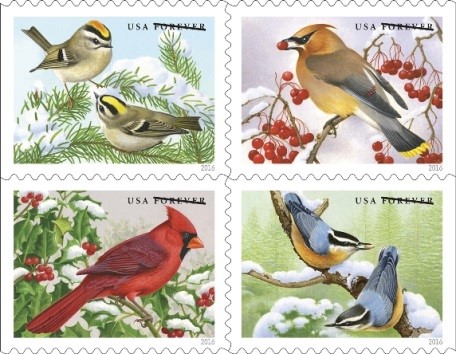