DETROIT — Today, the U.S. Postal Service and Canada Post jointly issued The History of Hockey stamps that now are available nationwide. Hockey fans are asked to share the news using the hashtag #HockeyStamps. 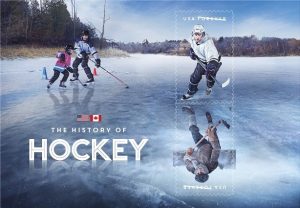 “Hockey is the perfect subject for Canada and the United States to honor through these stamps,” said Brennan. “These unique commemorative stamps capture the history and tradition that have defined our shared winter pastime and symbolize the people, places and events that connect us.”

“The joint stamp issue is the sixth by Canada Post and the United States Postal Service,” said Chopra. “The subjects chosen for the joint issues highlight how much our nations have in common. Hockey is one of those things. These stamps celebrate the shared love of hockey, a game now firmly rooted in the lore of both nations.”

The souvenir sheet (above) features a scene that illustrates the evolution of the sport across generations. The selvage — the area outside of the stamps on the souvenir sheet — depicts a father teaching his daughter how to play hockey on a pond.

“There is nothing like the game of hockey. It’s the greatest game in the world,” said hockey legend Kelly. “Having played professional hockey in both the United States and Canada, it is wonderful for me to see the United States Postal Service and Canada Post unite to produce the History of Hockey stamps, depicting hockey at its purest roots. I am pleased to be back in Detroit and part of this momentous occasion.”

“The Howe family applauds Canada Post and the U.S. Postal Service for their tremendous collaborative efforts and vision to create the History of Hockey stamps,” said Howe, son of Gordie, one of the greatest hockey icons of all-time. The stamps will serve as a beautiful symbol of the bond between our two nations, and as a tribute to the players, teams, officials, concessioners, broadcasters, reporters, sponsors, and fans who all play an integral role in this sport we love so much. We owe much to the game of hockey, and feel blessed to be a part of this momentous occasion.” 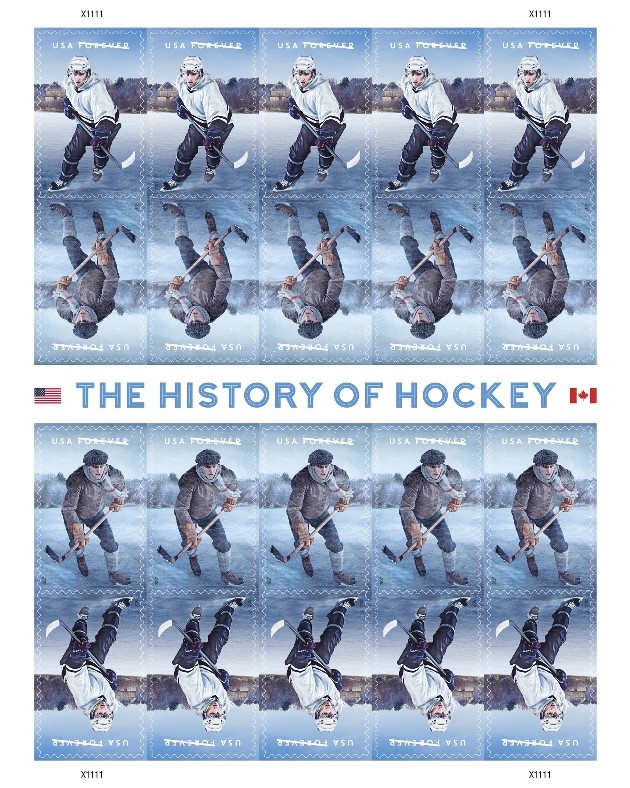 The second stamp pictures a vintage player representing the game’s past set against a snowy background. One player is wearing a contemporary uniform and using modern equipment, and the other is wearing vintage garb and using old-fashioned equipment. The two vertically stacked stamps in the souvenir sheet, which are arranged to mirror each other, are identical to those sold also as a pane of 20. “The History of Hockey” appears in the bottom left corner of the sheet under the flags of the United States and Canada.

As Forever stamps, The History of Hockey stamps are always equal in value to the current First-Class Mail one-ounce price.

In the 1800s, the sport truly began to take shape in Eastern Canada. By the late 19th century, the game had grown popular in the United States. American Malcolm Greene Chace became interested in the game and assembled a group of players from various universities. In 1896, a team from Yale, which included Chace, faced Johns Hopkins University in the first college hockey game. Soon, professional leagues formed in North America. The sport has continued to flourish, and today, women’s hockey is thriving. The National Hockey Association began play in 1910 and evolved into the National Hockey League in 1917. In 1924, the Boston Bruins became the first American team to join the National Hockey League.

Ordering First-Day-of-Issue Postmarks
Customers have 60 days to obtain first-day-of-issue postmarks by mail. They may purchase new stamps at United States Post Office locations, at the Postal Store usps.com/shop or by calling 800-782-6724. They must affix the stamps to envelopes of their choice, address the envelopes to themselves or others and place them in larger envelopes addressed to:

After applying the first-day-of-issue postmark, the Postal Service will return the envelopes through the mail. There is no charge for postmarks up to a quantity of 50. For more than 50, customers are charged
5-cents each. All orders must be postmarked by Dec. 20, 2017.

Philatelic Products
The U.S. Postal Service and Canada Post will sell each country’s products. The following U.S. Philatelic products are available at usps.com/shop.

You may view many of this year’s other stamps on Facebook at facebook.com/USPSStamps or via Twitter @USPSstamps.