CHICOPEE – A man accused of driving about 100 miles an hour on Granby Road and running a red light has been arrested after allegedly causing a three-car crash Saturday.

Jonathan Cotto, 24, of 355 High St., New Britain, Connecticut, was arrested immediately after the 5;15 p.m. crash. Cotto is being accused of speeding through a red light and striking a mail truck causing it to flip onto its side. The impact also caused a car behind the mail truck to be struck, he said.The Postal Service employee was injured and trapped in the mail truck. 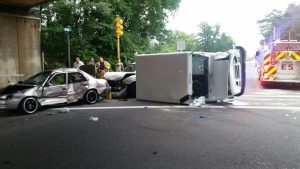 Four other people, including Cotto, were also injured and brought to area hospitals.

The mail truck operator and a passenger in the third vehicle are listed in stable condition in area hospitals. The remaining victims have been released, Wilk said.