A portrait of the nation’s first Postmaster General recently returned to USPS headquarters in Washington, DC.

The 7-foot painting of Benjamin Franklin was commissioned in 1918 for PMG Albert Burleson. The artist was Benedict Anton Osnis. 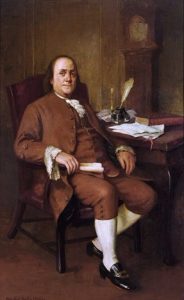 The portrait adorned the PMG’s office until 1973, when USPS headquarters moved to L’Enfant Plaza in Washington, DC.

The painting hung in a reception area at headquarters until the late 1990s. In 2001, it was loaned to the Environmental Protection Agency.

Franklin is now on display again at headquarters.