“The list” has spent the past few weeks looking at some of the unique ways USPS delivers mail. Here are six methods that are no longer used. 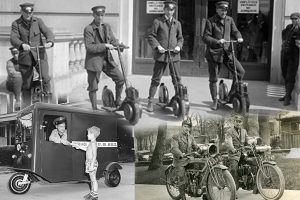 1. Pneumatic tubes. From the 1890s to the 1950s, mail zipped between some postal facilities through a series of underground tubes. The mail was carried inside canisters that were propelled by pressured air.

4. Motorcycles. The Post Office Department used motorcycles for mail delivery until the late 1920s, when automobiles and trucks became the vehicles of choice.

5. Mailsters. These three-wheeled vehicles were introduced in the 1950s and phased out beginning in 1967. Their top-heavy, lightweight construction caused tipping in strong winds and offered little accident protection.

6. Segways. In 2002, USPS began testing the Segway but ended its evaluation a few months later. It lacked adequate storage space and couldn’t travel a full route on one charge.

If you missed them, check out our June 6 and June 13 lists on unique delivery methods. Got ideas for future editions of “The list”? Email them to uspslink@usps.gov.