ROCHESTER, NY — Robert Panara, an influential teacher, poet and pioneer in the field of deaf studies, was immortalized as the 16th inductee into the U.S. Postal Service’s Distinguished American stamp series on a Forever stamp today. The dedication ceremony took place at the theatre bearing his name at Rochester Institute of Technology’s (RIT) National Technical Institute for the Deaf (NTID).

The 2-ounce stamp features a photograph of Panara taken in 2009 by Mark Benjamin, official NTID photographer. Panara is shown signing the word “respect.” Ethel Kessler of Bethesda, MD, was the art director. This Forever stamp will always be equal in value to the current First-Class Mail 2-ounce price. The current price is 70-cents. 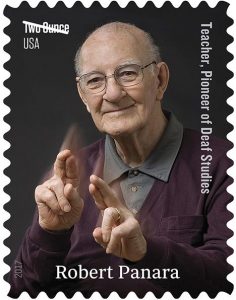 Followers of the Postal Service’s Facebook page can view streaming video of the event at facebook.com/USPS. The public is asked to share the news on Twitter and Instagram using the hashtag #PanaraForever and #DeafEducation.

During his 40-year teaching career, Panara (1920-2014) inspired generations of students with his powerful use of American Sign Language (ASL) to convey Shakespeare and other works of literature. One of his best-known poems was the intensely personal “On His Deafness.”

“Our stamps are miniature works of art that highlight the American experience,” said U.S. Postal Service Chief Operating Officer and Executive Vice President David Williams in dedicating the stamp. “In creating this stamp our goal was to communicate Robert Panara’s love and enthusiasm for literature, poetry and theatrical pieces as he used American Sign Language to make each topic more dramatic and enlightening. Poetry and drama came to life through his unique style of expression, Robert was famous for his ability to establish an immediate rapport with his students, through fluid, eloquent sign language which many described as ‘sculptures in the air’.”

“Seeing my father honored on a U.S. postage stamp as a ‘Distinguished American’ makes me extremely proud,” said Panara. “As a teacher and an authority in the fields of literature and deaf studies, he inspired so many people, both deaf and hearing, during his lifetime. It’s an especially important milestone for the deaf community. Deaf people everywhere can celebrate this stamp that helps promote deaf awareness.”

Lang, author of a leading Panara biography, quoted an essay written in Panara’s college days in 1944. “He wrote in an essay, ‘What the world needs today is more teaching that comes from the heart and soul,’” said Lang, who used the phrase in his book titled: Teaching From the Heart and Soul: The Robert F. Panara Story. “I knew Bob well for more than 40 years, and as his biographer I can vouch that he lived that ideal. He was — and still is — cherished by his students, colleagues and friends for his passion and compassion.”

Benjamin, who photographed Panara for a Signing in Public Spaces poster, said he was a much-loved personal friend and icon of the deaf community. “I had photographed Bob often for various events and awards, and we had worked on projects together here at the NTID,” said Benjamin. “It was an honor to try to capture the essence of Bob Panara — intelligent, creative, kind, funny and full of joy. I hope this image helps to convey his story.”

Panara’s Legacy
At age 10, Panara was profoundly deafened after contracting spinal meningitis, which damaged his auditory nerves. He attended Gallaudet College (now University), in Washington, DC, from 1940 to 1945. In essays such as “The Significance of the Reading Problem” and “Poetry and the Deaf,” he began to consider the best methods of teaching deaf students and inspiring them to learn. Panara believed, as he put it in the former essay, that teaching should come “from the heart and soul” — a philosophy captured in Lang’s biography.

After becoming the first deaf person to obtain a master’s degree in English at New York University, Panara returned to Gallaudet in 1948 to teach English. There he became widely admired for his dynamism, innovative techniques and passion for poetry and English literature. When the Gallaudet Theatre was established, he helped translate a number of plays into sign language, including Oedipus Rex, Hamlet and Othello.

In 1967, Panara was one of the founders of the groundbreaking Waterford, CT-based National Theatre of the Deaf, which provided deaf actors with a venue for thriving in the performing arts. He also helped found NTID and in 1967 became its first deaf faculty member. The new college was part of the Rochester Institute of Technology in New York state.

Panara taught English to both deaf and hearing students at NTID for the next 20 years. At his retirement in 1987, he left a legacy that included the drama club he founded in 1970; a theater named after him; a more widespread appreciation for the expressiveness and complexity of ASL; and many former students who felt they owed much of their later success to his influence.

In addition to teaching, Panara made significant contributions to the field of deaf studies. He was one of the editors of The Silent Muse: An Anthology of Prose and Poetry by the Deaf (1960). In the early 1970s, he wrote influential articles on deaf American writers and deaf characters in modern literature. In 1983, with his son John, he wrote the book Great Deaf Americans.

Ordering First-Day-of-Issue Postmarks
Customers have 60 days to obtain first-day-of-issue postmarks by mail. They may purchase new stamps at Post Office locations, at the Postal Store usps.com/shop or by calling 800-782-6724. They should affix the stamps to envelopes of their choice, address the envelopes to themselves or others and place them in envelopes addressed to:

After applying the first-day-of-issue postmark, the Postal Service will return the envelopes through the mail. There is no charge for postmarks up to a quantity of 50. For more than 50, customers are charged 5 cents each. All orders must be postmarked by June 11, 2017.

Philatelic Products
There are five philatelic products for this stamp issue:

Many of this year’s other stamps may be viewed on Facebook at facebook.com/USPSStamps or via Twitter @USPSstamps.