LOS ANGELES — The number of postal employees attacked by dogs nationwide reached 6,755 in 2016 — more than 200 higher than the year before. The U.S. Postal Service (USPS) released its annual ranking of top dog attack cities today, highlighted safety initiatives to help protect its employees and offered tips to pet owners.

“Even good dogs have bad days,” said U.S. Postal Service Safety Director Linda DeCarlo in Los Angeles, where postal employees suffered 80 attacks — more than any other city in 2016. “Dog bite prevention training and continuing education are important to keep pet owners, pets and those who visit homes — like letter carriers — happy and healthy.” 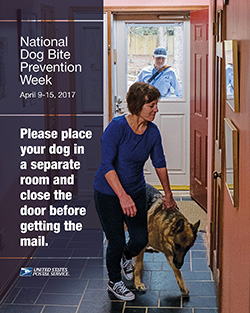 Enhancing Employee Safety
DeCarlo highlighted USPS safety measures that alert letter carriers to dogs on their delivery routes.  The Package Pickup application on usps.com asks customers to indicate if there are dogs at their addresses when they schedule package pickups. This information is provided to letter carriers on their delivery scanners, which also can send real-time updates if an unleashed dog is reported in a delivery area.

“The scanners that Postal Service letter carriers use to confirm a customer’s delivery include a feature for carriers to indicate the presence of a dog at an individual address,” said DeCarlo. “This information is particularly helpful for substitute carriers who fill in for regular carriers on their days off.”

Half of the 4.5 million Americans bitten by dogs annually are children, according to the Centers for Disease Control and Prevention (CDC).

DeCarlo gave the following tips and encouraged sharing them using the hashtag #preventdogbites. Click this link to a video on dog bite prevention tips.

2016 Dog Attack Rankings by City
A total of 6,755 postal employees were attacked by dogs in calendar year 2016. The top 30 city rankings are comprised of 40 cities as more than one city experienced the same number of attacks.