Fire destroyed the post office in downtown Winthrop Tuesday morning, drawing dozens of firefighters to Main Street as a large plume of smoke hung over the town.

While the post office’s red brick walls were still standing by the end of the response, much of the rest of the building was destroyed. Its insides were gutted, according to Winthrop Fire Chief Dan Brooks, and part of the metal roof collapsed.

The fire was first reported at 8:54 a.m. All postal workers safely exited the building by the time its interior was consumed by flames and smoke was billowing out of its eves, according to Brooks.

Main Street was closed to traffic as firefighters worked at the scene. Because it was a federal building, the Bureau of Alcohol, Tobacco, Firearms and Explosives are investigating the causes of the fire, Brooks said.

The weather was mild Tuesday morning, and many onlookers came out to watch the progress of the firefighters. 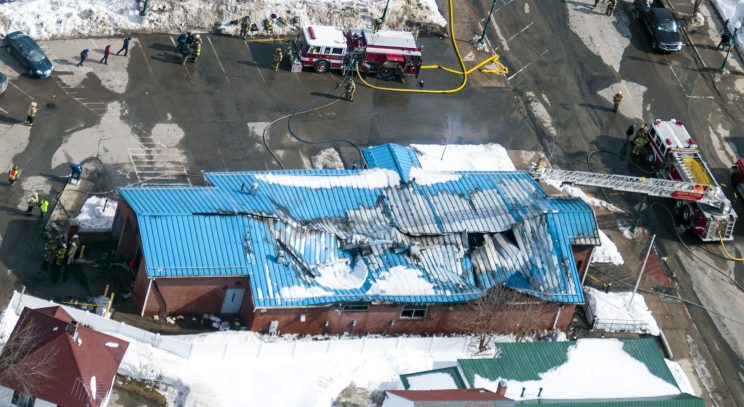 “It’s too bad,” said Bill Cole, a retiree who came downtown on Monday after hearing about the blaze from his daughter — she lives in Massachusetts and read about the fire on Facebook. “This building was a longtime coming. I think people took pride in it, because there isn’t too much on Main Street. It’s really a shame.”

No information was immediately available about the future of the Winthrop Post Office, the mail that was stored there and the postal routes that relied on it.

On Tuesday, Postmaster Scott Allarie was at the scene of the fire, but deferred questions to a spokesperson for the United States Postal Service, who is based in Massachusetts and did not immediately respond to a request for comment.