From A Grand Alliance to Save Our Public Postal Service:

The Post has set up a false dilemma for its readers: that we must curtail postal services (including Saturday delivery) and eliminate jobs to save the USPS from certain deterioration and failure. They base this on claims that the Postal Service “can’t pay their bills” and is sluggish to innovate. 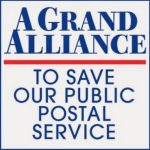 In reality, Congress manufactured USPS’ “crisis” by imposing an unfair, crushing financial mandate on the Postal Service that no other government agency or private company is forced to bear. (The Postal Accountability and Enhancement Act of 2006 compels the USPS to pay approximately $5.5 billion per year to fund future retiree healthcare costs 75 years in advance.) Without this unreasonable burden, the USPS would have enjoyed an operating profit of $610 million in 2016 and over $1.2 Billion in 2015. Including the first quarter of Fiscal Year 2017, USPS has seen an operating profit of $3.7 billion since the start of FY 2014. This same legislation holds the Postal Service back from introducing new non-postal services, services that could strengthen the USPS. This crisis was created by Congress, and it can be corrected.

The Post’s rationale for cutting services is one we have seen before, promoted by forces complicit in the drive towards demonizing, destroying, and ultimately privatizing public postal services. But the Postal Service continues to rank highest in public support among all federal agencies, while providing affordable mail service to all without a dime of taxpayer money. Every day, the Postal Service ties together communities, supports commerce and, increasingly, the boom of e-commerce, and provides the foundation for financial stability for workers from all walks of life.

We do not have to settle for the false choice offered by The Washington Post. The more than 100 organizations which make up A Grand Alliance to Save Our Public Postal Service believe that the public good must not be sacrificed for private profit. We advocate for an alternative vision, one of expanded and enhanced services that sustain a vibrant public postal service for generations to come. Local post offices could offer non-profit, consumer-friendly financial services, for example. Other ideas include outfitting post offices to serve as hubs for local food banks, internet access, and green energy infrastructure. Let’s continue to work together to bring these ideas into reality.

Source: Washington Post Gets It Wrong | A Grand Alliance