WASHINGTON — Excluding the effects of a $1.7 billion change in its workers’ compensation liability due to fluctuations in interest rates, the U.S. Postal Service posted a net loss of approximately $200 million for the first quarter of fiscal year 2017 (October 1, 2016 – December 31, 2016).

Controllable income for the quarter was $522 million compared to $1.3 billion for the same period last year, a decrease of $735 million. Operating revenue decreased by $155 million, and was significantly impacted by the April 2016 expiration of the exigent surcharge. If the exigent surcharge had remained in place, the Postal Service would have generated approximately $570 million in additional revenue during the quarter.

The first quarter, which includes the holiday mailing season, is typically the Postal Service’s strongest quarter of the fiscal year. The Postal Service processed and delivered a record volume of packages during the 2016 holiday season, and for the entire quarter, the Shipping and Packages business experienced revenue growth of $701 million, or 14.7 percent over the same period in the prior year.

However, this positive development in the Shipping and Packages business was offset by a decline in First-Class Mail revenue of $568 million, or 7.5 percent, due largely to the exigent surcharge expiration noted above and continuing electronic migration. Revenue from Standard Mail (renamed USPS Marketing Mail, as of January 22, 2017) decreased approximately $224 million over the prior year quarter, again due mainly to the loss of the exigent surcharge. Volume increased in political and election mail, but there was a shift in the mail mix and volume declines in other Marketing Mail products. (See Selected FY 2017 First Quarter Results of Operations table below).

Overall, the Postal Service continues to operate within an unsustainable business model because of mandated costs such as an unaffordable retiree health benefits program that is not fully integrated with Medicare, and an ineffective pricing system.

“Our current financial situation is serious, but solvable,” said Postmaster General and CEO Megan J. Brennan. “With legislation that contains broadly supported provisions to improve our business model, the Postal Service can generate total savings of $26 billion over the next five years. When combined with a favorable outcome of the recently initiated 10-year pricing system review by the Postal Regulatory Commission and continued aggressive management actions, the Postal Service would return to financial stability.”

“Despite the loss of revenue from the expiration of the exigent surcharge and continued effects of electronic migration on First-Class Mail revenue, we continue to believe there is strength in the postal system, and that there is a path forward for us to return to financial health,” said Chief Financial Officer and Executive Vice President Joseph Corbett. “However, the Postal Service’s return to long-term financial stability is only possible when our continuing actions to improve efficiency, reduce costs and expand our use of technology are combined with our proposed legislative and regulatory reforms that together will enable us to continue to meet our universal service obligations and invest in the future of the Postal Service and the mailing industry as a whole.”

The following table details retiree health benefits expenses, including the changes that are taking effect in fiscal year 2017, for the three months ended December 31, 2016, and 2015:

This news release references operating revenue before the temporary exigent surcharge, which is not calculated and presented in accordance with accounting principles generally accepted in the United States (GAAP).

The following table reconciles these non-GAAP operating revenue calculations with GAAP net income for the three months ended December 31, 2016, and 2015:

This news release references controllable income, which is not calculated and presented in accordance with GAAP. Controllable income is a non-GAAP financial measure defined as net income adjusted for items outside of management’s control. These adjustments include workers’ compensation expenses caused by actuarial revaluation and discount rate changes, PSRHBF prefunding expenses and the amortization of PSRHBF, CSRS and FERS unfunded liabilities.

The following table reconciles the Postal Service’s GAAP net income of $1.4 billion for the quarter to controllable income and illustrates the income from ongoing business activities without the impact of non-controllable items for the three months ended December 31, 2016, and 2015: 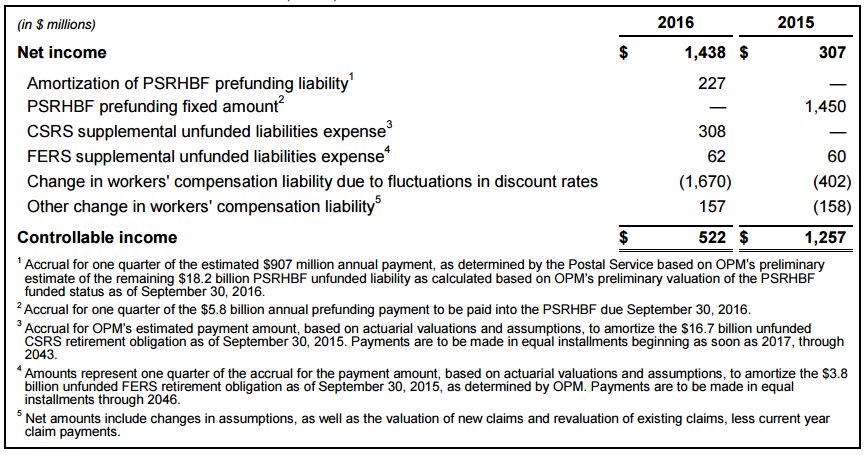 Complete financial results are available in the Form 10-Q, available at http://about.usps.com/who-weare/financials/welcome.htm.