The Trump regime has turned to union-busting Wisconsin governor Scott Walker for advice on “reforming”federal workforce. Walker, while running for President briefly in 2015 advocated outlawing federal employee unions, according to Government Executive: 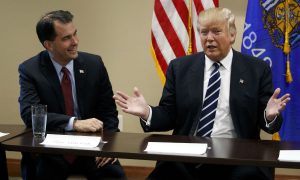 The governor’s ultimate goal, he said in a “white paper” released at the time, was to eliminate federal employee unions entirely.

“It’s time to address the problems with collective bargaining in public service rather than tinker around the edges,” he wrote. “As president, I will work with Congress to eliminate big-government, federal unions on behalf of the American taxpayer. Big-government unions should have no place in the federal workplace, and I will reform the law to prohibit them.”

Gov. Scott Walker, R-Wis., said this week he met with Vice President Pence and former House Speaker Newt Gingrich at the White House to discuss how the administration can bring reforms in Wisconsin to the federal level.