The 40th stamp in the Black Heritage series honors Height, a tireless activist, who dedicated her life to fighting for racial and gender equality. She became one of the most influential civil and women’s rights leaders of the 20th century. 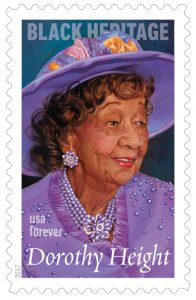 “The Dorothy Height Forever stamp will serve as a lasting tribute to her life and legacy of seeking equality and justice for all Americans, regardless of ethnicity, gender or race.”

The Dorothy Height stamp features artist Thomas Blackshear II’s, portrait of Height. The painting is based on a photograph shot by Lateef Mangum in 2009. Art director Derry Noyes designed the stamp.

In 1963, the Height-led National Council of Negro Women joined the Council for United Civil Rights Leadership. Height was an architect of the August 1963 March on Washington, where she shared the stage with Martin Luther King Jr. It was Height who pushed to include a voice of youth like John Lewis of the Student Nonviolent Coordinating Committee and insisted on no time limits for King’s speech.

Gender equality also was important to Height, who fought for the rights of women, particularly women of color. President John F. Kennedy named her to his Commission on the Status of Women, which was chaired by Eleanor Roosevelt. Height attended the 1963 White House ceremony where Kennedy signed the Equal Pay Act. In 1971, she helped form the National Women’s Political Caucus.

In 1977, Height officially retired from the Young Women’s Christian Association (YWCA), for which she worked for 40 years. In addition to numerous honorary degrees, Height received the nation’s two highest civilian honors. In 1994, President Bill Clinton awarded her the Presidential Medal of Freedom. A decade later, President George W. Bush presented her with the Congressional Gold Medal. In 2009, she was a guest of Barack Obama when he was sworn in as the nation’s 44th president.

The Dorothy Height stamp is being issued as a Forever stamp, which will always be equal in value to the current First-Class Mail 1-ounce price. The public is asked to share the news of the stamp using the hashtags #DorothyHeightForever and #BlackHeritageStamps.

Customers may purchase the Dorothy Height Forever stamp at usps.com/stamps, at the Postal Store usps.com/shop, by calling 800-STAMP24 (800-782-6724) and at Post Offices nationwide. A variety of stamps and collectibles also is available at ebay.com/stamps.

Ordering First-Day-of-Issue Postmarks
Customers have 60 days to obtain first-day-of-issue postmarks by mail. They may purchase new stamps at local Post Offices, at the Postal Store usps.com/shop or by calling 800-782-6724. They should affix the stamps to envelopes of their choice, address the envelopes to themselves or others and place them in envelopes addressed to:

After applying the first-day-of-issue postmark, the Postal Service will return the envelopes through the mail. There is no charge for postmarks up to a quantity of 50. For more than 50, customers are charged 5 cents each. All orders must be postmarked by April 1, 2017.

Many of this year’s other stamps may be viewed on Facebook at facebook.com/USPSStamps or via Twitter @USPSstamps.