The share of American workers in unions fell to the lowest level on record in 2016, showing a return to the downward trend for organized labor after membership figures had stabilized in recent years. 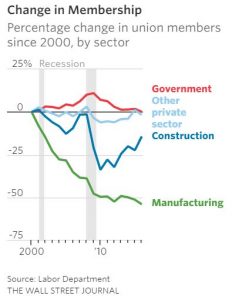 Only 10.7% of workers were union members last year, down from 11.1% in 2015, and from more than 20% in the early 1980s. It is unclear whether any of Republican President Donald Trump’s policies could reverse this decadeslong slide in private-sector union membership, especially when unions were unable to gain traction with a union-friendly Democrat in the White House.