OTTAWA – Canada Post will greet the Year of the Rooster with a two-stamp issue, the ninth in its most recent series honouring the Lunar New Year.

A Permanent™ domestic-rate stamp featuring a rooster image, with its chest proudly puffed out, is paired with an international-rate stamp offering a close-cropped profile view of the rooster’s stately face. Both images are created from lines of gold foil. 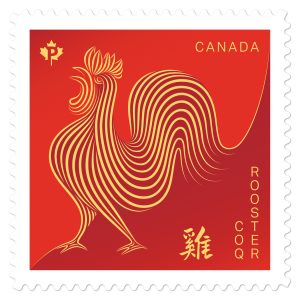 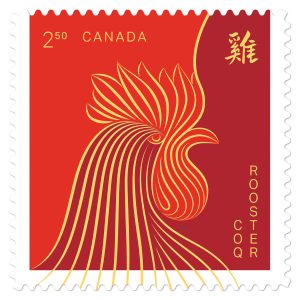 “Canada Post is proud to celebrate the vibrant and festive occasion that is the Lunar New Year, which is marked by Canadians of Chinese, Korean, Vietnamese and other East Asian heritage,” says Canada Post President and CEO Deepak Chopra. “The annual unveiling of this stamp issue has become a much-anticipated event, with the artistry of the series praised by both collectors and mailers.”

Designed by Paprika, a firm in Montréal, the stamps include several features: