A North Carolina rural carrier has been arrested and charged with dealing drugs on her route:

Sheriff Darren E. Campbell stated: As the result of an ongoing investigations into the sale and distribution of prescription medications by the Iredell County Sheriff’s Office Narcotics Investigation Unit, Michelle Barton Rogers was arrested on January 4, 2017. 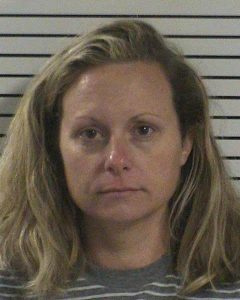 This case began when investigators developed information about Rogers selling prescription Opana pills. An undercover operation was established and soon a hand to hand purchase of Opana pills was made between Rogers and an undercover investigator. During the surveillance of the suspect and on the buy occasion, Rogers was employed as a mail carrier and had US Mail in her vehicle.

The suspect was taken into custody on Wednesday morning by sheriff’s office narcotics investigators and agents of the United States Postal Inspectors. The arrest took place at the main post office in Statesville. Michelle Rogers was transported to the Iredell County Detention Center. Rogers was charged with one count of Felony Possession with Intent to Sell and Deliver Schedule II (Opana) and one count of Felony Sell and Deliver Schedule II (Opana), she was placed under 5000.00 dollars bond.

Rogers has been employed by the USPS since January, 2000.