WASHINGTON — The Postal Service today announced more stamps to be issued in 2017.

“The new year is shaping up to be exceptional as the Postal Service continues to produce stamps that celebrate the people, events and cultural milestones that are unique to the history of our great nation,” said Mary-Anne Penner, U.S. Postal Service Director, Stamp Services.

“We are very excited to showcase these miniature works of art to help continue telling America’s story as we add to the lineup of 2017 stamps announced earlier.”

Here are the newest additions: 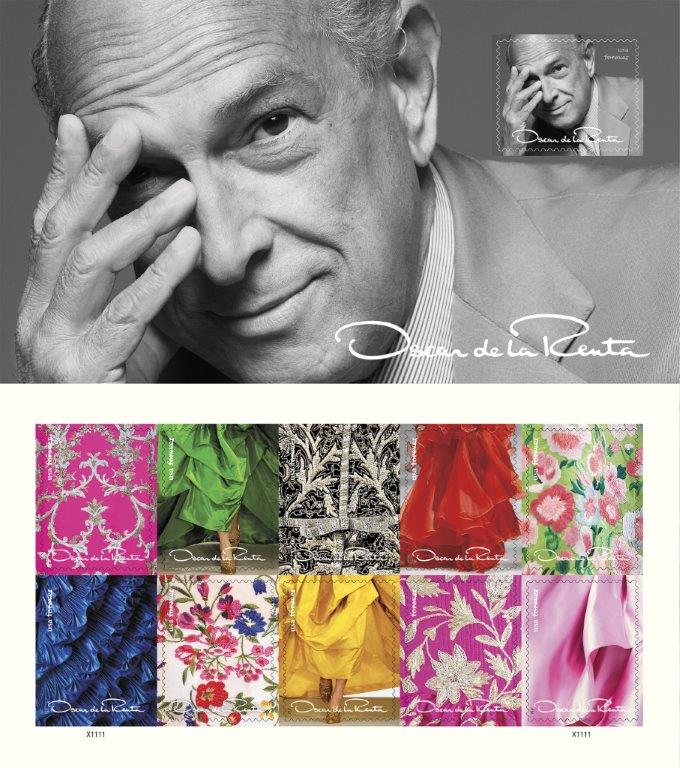 Most widely known for dressing the nation’s first ladies and celebrities, Oscar de la Renta (1932–2014) was one of the world’s leading fashion designers for more than 50 years. This pane of 11 stamps features an evocative black-and-white portrait of the couturier and 10 details from several of his most exquisite gowns. De la Renta’s innovative designs and close attention to detail are said to have elevated American style and brought international attention to New York as a world leader in fashion. Art director Derry Noyes designed the stamps. Oscar de la Renta portrait photo by Inez van Lamsweerde & Vinoodh Matadin.
Photo of light pink gown by Norman Jean Roy. 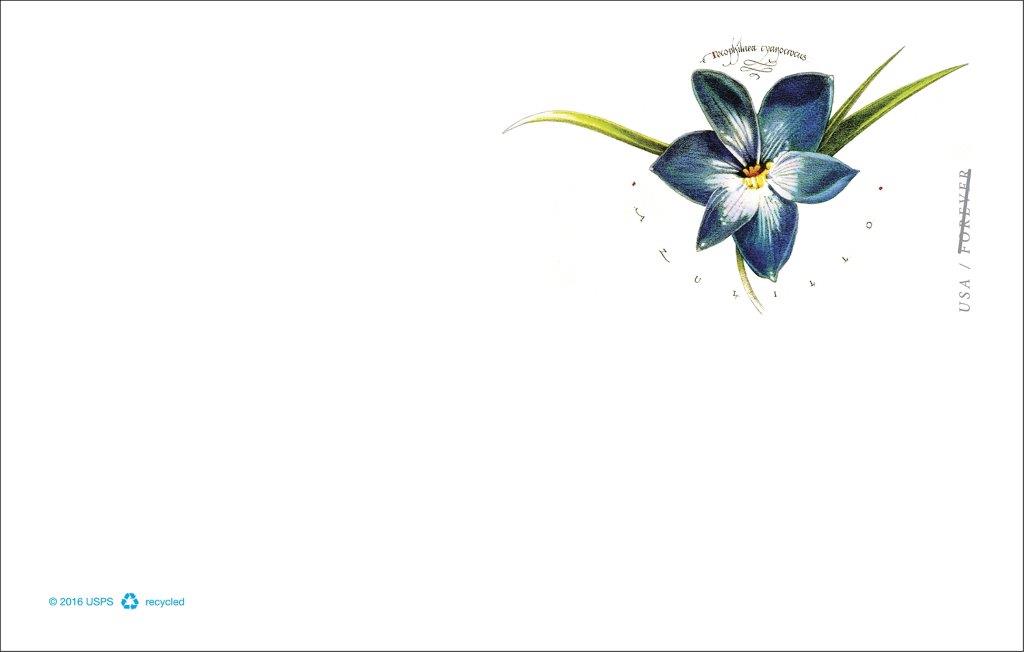 Azulillo (stamped card)
The U.S. Postal Service issues a new stamped card for 2017 featuring an illustration of a Chilean blue crocus (Tecophilaea cyanocrocus) from pre-existing artwork by illustrator and designer Dugald Stermer (1936–2011). His penciled calligraphy under the flower indicates one of its common names azulillo — loosely translated from Spanish, it means “little blue thing”— with its botanical name above. The Chilean blue crocus is hardy in U.S. Department of Agriculture zones seven to nine. It generally flowers in February or March in North America. Art director Ethel Kessler designed the stamped card. 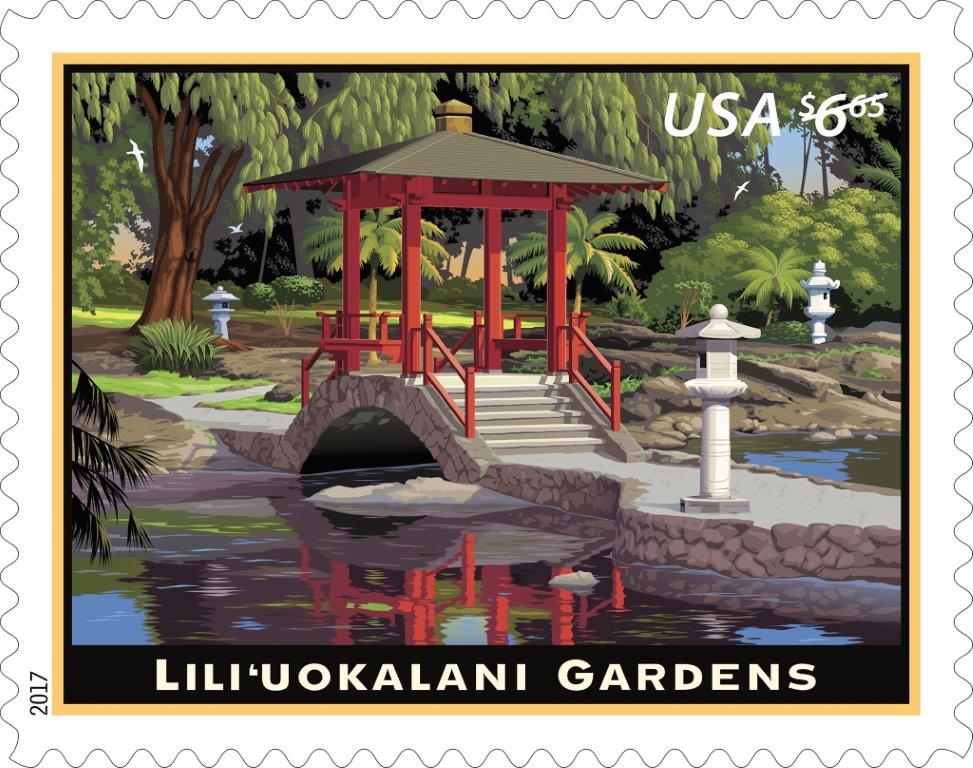 Lili‘uokalani Gardens (Priority Mail)
This Priority Mail stamp is being issued to coincide with the 100th anniversary of Lili‘uokalani Gardens in Hilo, Hawai‘i. Built on land donated by Queen Lili‘uokalani (1838–1917), the last Hawaiian monarch to govern the islands, the gardens were dedicated in 1917 and named in her honor. Hilo’s Lili‘uokalani Gardens are Japanese in style with influences of Hawaiian remains of lava flows, plantings of tropical trees and flowers, and a view of the Mauna Kea volcano — Hawai‘i’s highest point. The stamp art features one of the gardens’ most iconic structures, the red wooden shelter on a stone bridge spanning a portion of the pond. The bridge is surrounded by three stone lanterns and lush tropical plants. Art director Greg Breeding designed the stamp with original art by Dan Cosgrove. 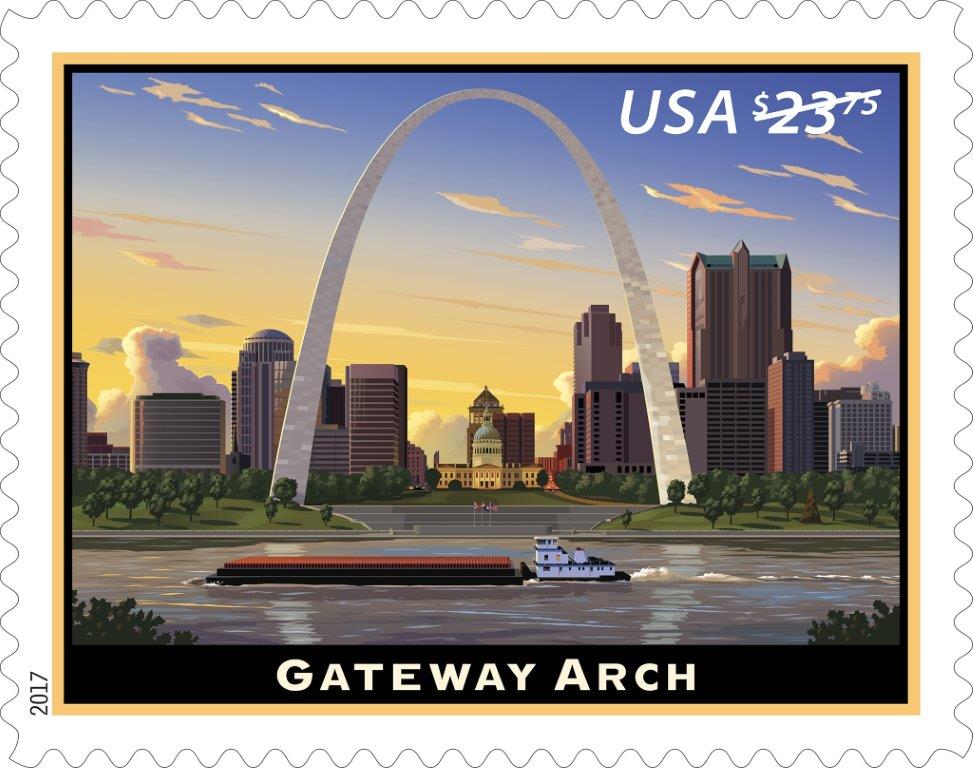 Gateway Arch (Priority Mail Express)
The Postal Service celebrates the Gateway Arch, in St. Louis, MO, with a new Priority Mail Express stamp. The Gateway Arch was built as a memorial to President Thomas Jefferson and the 19th-century traders and pioneers for whom St. Louis was the gateway to the West. The stamp art depicts the majestic stainless-steel arch at sunset in its setting on the banks of the Mississippi River. Towering above the city’s skyline, the Gateway Arch is reflected in the rippling water below, where a barge passes by. Designed by art director Greg Breeding, the stamp features a digital illustration created by Dan Cosgrove.

Patriotic Nonprofit
Patriotic Nonprofit, the new non-denominated, nonprofit-price stamp, showcases the letters “USA” in blue, accompanied by a bright red star on a white background with a blue border. To create the new design, the 2016 USA stamp art was rendered slightly smaller to accommodate the blue border. Intended for bulk mailings by authorized nonprofit organizations, this stamp will be issued in coils of 10,000. Art director Antonio Alcalá designed the 2017 Patriotic Nonprofit stamp using the 2016 USA stamp art he designed with Leslie Badani.

Customers may purchase 2016 Forever stamps at usps.com/stamps, at the Postal Store usps.com/shop, by calling 800-STAMP24 (800-782-6724) and at Post Office locations nationwide. A variety of stamps and collectibles also is available at ebay.com/stamps.