We’re sad to hear of the death of Carrie Fisher, the daughter of Eddie Fisher and Debbie Reynolds, who died earlier today after reportedly suffering a massive heart attack on a flight from London to Los Angeles on Friday.

Fisher became an American cultural icon after her performance as Princess Leia in the Star Wars films. She appeared in many other films, and wrote several best selling memoirs, but for Americans of a certain age, she’ll always be Princess Leia.

Fisher also has the rare distinction of being one of the few Americans to have appeared on a US stamp while she was still alive. In 2007, the US Postal Service issued a set of 20 Star Wars stamps. One of the stamps depicted Fisher in the role of Princess Leia, giving the android R2D2 the blueprints for the Death Star. 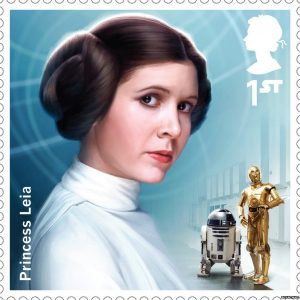 Fisher also appeared on a Royal Mail stamp in the United Kingdom last year, as part of the build up to “The Force Awakens”.

She had also been expected to appear in the next film in the Star Wars series, due in theaters next year.