WASHINGTON — The Postal Service today announced more subjects that will be featured on Forever stamps in the new year.

Here are the latest additions:

Dorothy Height (Black Heritage series)
The 40th stamp in the Black Heritage series honors Dorothy Height (1912-2010), the tireless activist who dedicated her life to fighting for racial and gender equality. Although she rarely gained the recognition granted her male contemporaries, she became one of the most influential civil rights leaders of the 20th century. The stamp features artist Thomas Blackshear II’s gouache and acrylics on board portrait of Height. The painting is based on a 2009 photograph shot by Lateef Mangum. Art director Derry Noyes designed the stamp.

Nebraska Statehood (Statehood series)
This stamp celebrates the 150th anniversary of Nebraska’s statehood. Known for agriculture, the Cornhusker State became the 37th state on March 1, 1867. Nebraska photographer Michael Forsberg set up among prairie grasses on the riverbank between the small cities of Grand Island and Kearney to capture the image shown on the stamp. In the photograph, sandhill cranes fly low to scout for shelter from nighttime predators. This mid-migratory rest for half a million birds along the Platte River is unique to Nebraska. Forsberg captured this image as winter thawed into spring around the year 2000. Art director Derry Noyes designed the stamp using Forsberg’s existing photograph.

Celebration Boutonniere
This new Forever stamp is similar in design to the two-ounce Celebration Corsage stamp and can be used for weddings and RSVP cards. It also is perfect for party invitations, thank-you notes, announcements, birthday cards, Father’s Day cards and other occasions. The stamp art features a photograph of an arrangement of ranunculus, with floral accents of succulents, Astrantia, Berzelia, and clubmoss greenery. The ribbon wrapping the stems harmonizes with the colors and textures of the plant material. The boutonniere was arranged by floral designer Carol Caggiano and photographed by Renée Comet. Art director Ethel Kessler designed the stamp.

Celebration Corsage
This new 2-ounce stamp is perfect for many of life’s special moments, as it can accommodate the weight of heavy invitations for birthdays, weddings, anniversaries, and other celebrations; oversize greeting cards for all occasions; and mailings such as small gifts that require extra postage. Celebration Corsage is similar in design to the Celebration Boutonniere Forever stamp, and the two form a natural pair.  The corsage was arranged by floral designer Carol Caggiano and photographed by Renée Comet. Art director Ethel Kessler designed the stamp.

Mississippi Statehood (Statehood series)
This stamp celebrates the 200th anniversary of Mississippi statehood. Mississippi became the 20th state on Dec. 10, 1817. The stamp features a 2009 photograph showing a close-up of a guitar player’s hands. Mississippi is the birthplace of many legendary blues artists who created a uniquely American genre of music. Among states, the Magnolia State is 32nd in size, and with nearly three million people, it ranks 31st in population. Art director Greg Breeding designed the stamp with an existing photo taken by Lou Bopp.

Robert Panara (Distinguished Americans series)
The 16th stamp in the Distinguished Americans series honors Robert Panara (1920-2014), an influential teacher and a pioneer in the field of deaf studies. The stamp features a 2009 photograph of Panara. He is shown signing the word “respect.” During his 40-year teaching career, Panara inspired generations of students with his powerful use of American Sign Language. Panara taught at Gallaudet University in Washington, DC for nearly 20 years at the National Technical Institute for the Deaf (part of the Rochester Institute of Technology in New York state). Art director Ethel Kessler designed the stamp with an existing photograph by Mark Benjamin, official photographer of the National Technical Institute for the Deaf in Rochester.

Have A Ball!
The U.S. Postal Service celebrates our nation’s passion for athletics with Have a Ball! The stamps feature colorful illustrations of eight different sports balls: baseball, basketball, football, golf, kickball, soccer, tennis and volleyball. Millions in the U.S. participate annually in the sports represented on the stamps. Mike Ryan designed the stamps and Greg Breeding served as the art director. Daniel Nyari created the colorful, stylized stamp art. 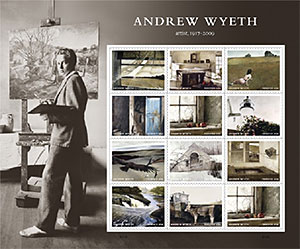 Andrew Wyeth
Mastering a realistic style that defied artistic trends, Andrew Wyeth (1917-2009) created haunting and enigmatic paintings based largely on people and places in his life — a body of work that continues to resist easy or comfortable interpretation. Finding endless inspiration both in his hometown of Chadds Ford, PA, and in rural Maine, he scrutinized the lives, houses and personal belongings of people around him, sometimes painting their portraits but just as often using objects and places to represent them. 2017 is the centennial of Wyeth’s birth. With subtle symbolism and eerie implications, his work invites us to reinterpret his personal vision. Derry Noyes art directed and designed this pane of 12 stamps.

Henry David Thoreau
With his personal example of simple living, his criticism of materialism and the questions he raises about the place of the individual in society and humanity’s role in the natural world, Henry David Thoreau (1817-1862) continues to inspire readers. For 26 months, Thoreau lived in a one-room house on a lake just outside his hometown of Concord, MA, writing prolifically while farming, reading, thinking, taking long walks and observing nature around him. “Walden,” the 1854 book he wrote about his experience, still holds the attention of readers by blending elements of numerous genres to create a complex, eclectic and unique work. Art director Greg Breeding designed this stamp with original art by Sam Weber.

Protect Pollinators
This stamp pays tribute to the beauty and importance of pollinators with stamps depicting two of our continent’s most iconic, the monarch butterfly and the western honeybee, each shown industriously pollinating a variety of plants native to North America. These particular species exemplify the ecological service provided by all pollinators, which include other insects, birds, and bats. Crop pollination by insects contributes approximately $15 billion of produce to the U.S. economy each year. Trending declines in their populations alert us that pollinators are helped by planting pollinator gardens with native flowers or heirloom varieties of fruits and vegetables. Art director Derry Noyes designed this stamp pane with existing photographs.

“The Snowy Day” Booklet
In 2017, Ezra Jack Keats’ most beloved story, The Snowy Day,” will be showcased. Written and illustrated by the celebrated children’s author, it was one of the first prominent 20th-century picture books centered on an African-American child. Each of the four new stamps in this 20-stamp booklet features a different illustration of main character Peter exploring and playing in his neighborhood while wearing his iconic red snowsuit. The images include: Peter forming a snowball, Peter sliding down a mountain of snow, Peter making a snow angel, and Peter leaving footprints in the snow. Art director Antonio Alcalá designed the stamps with Ezra Jack Keat’s original art. 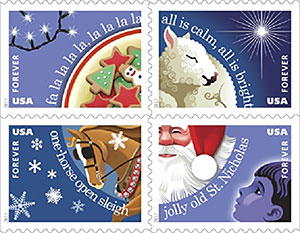 Customers may purchase 2016 Forever stamps at usps.com/stamps, at the Postal Store usps.com/shop, by calling 800-STAMP24 (800-782-6724) and at Post Office locations nationwide. A variety of stamps and collectibles also is available at ebay.com/stamps.